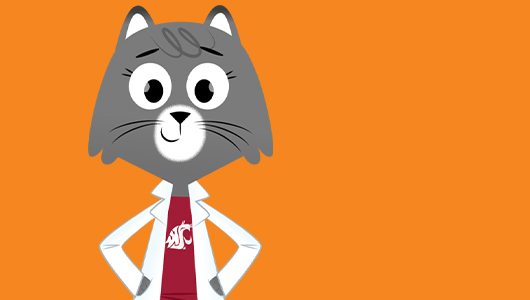 That’s what I found out from my friend Nanda Grow, an anthropologist and wildlife biologist at Washington State University who studies primates.

“Gorillas and chimpanzees both do knuckle walking, but they do different kinds,” she said.

As chimpanzees and bonobos walk around, they will extend their arms, flatten out their hands a bit and curl in the knuckle. Meanwhile, gorillas keep their arms straighter.

If you walked around on your knuckles, you might get tired, sore or wobbly. But for apes, knuckle-walking is one way to help them move their weight around.

Grow told me the average male gorilla is about 400 pounds. When gorillas walk on their knuckles, it can help them spread out their weight and protects their joints.

Apes also tend to have front legs that are longer than their back legs. When they get up on their knuckles, it shortens up the front legs a bit and provides some extra balance.

Of course, the environment where apes live can also shape how they get around. Apes such as gibbons spend a lot of time in trees.

Gibbons have really long arms that drag around on the ground. They don’t use their knuckles for walking. But their long arms come in really useful when they swing around the forest.

Chimpanzees also have long arms that they use for climbing in trees. But as you now know, they also use their knuckles when they are on the ground.

“They carry that with them from an ancestor in the past,” Grow said. “They have these long arms that still help them move around in trees, but now they’re spending more time on the ground.”

For a long time, people thought early humans might have walked on their knuckles as well. After all, apes are primates. You are a primate, too. This question created a lot of debate among scientists—and sometimes it still does.

“In the past, people thought that humans walked on their knuckles. Some people don’t really think that anymore,” Grow said. “It’s probably not a midway point between swinging in trees and walking on two legs. Some primates do it and some don’t.”

One of the primates that doesn’t use its knuckles is the pygmy tarsier. That’s the animal Grow studies. It’s about the size of a tiny guinea pig.

Instead of having really long arms, the pygmy tarsiers have really long legs. Well, long for their size.

Their ankle bones are long and help them propel from tree to tree. A pygmy tarsier’s legs are so powerful they allow it to jump ten times its own body length. Just imagine how far you could jump with legs like a pygmy tarsier.

Whether primates are swinging, jumping, running, skipping, knuckle-walking or walking upright, every species knows just the right way to get from one place to the next.