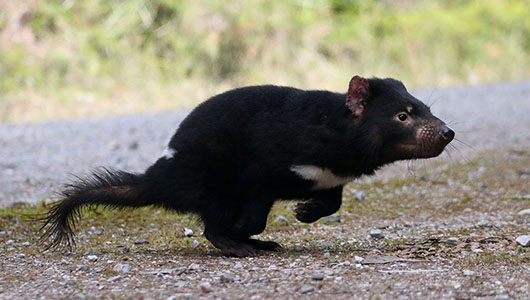 Amid the global COVID-19 crisis, there is some good news about a wildlife pandemic—which may also help scientists better understand how other emerging diseases evolve.

For the first time, an international research team led by biologist Andrew Storfer employed genomic tools of phylodynamics, typically used to track viruses, such as influenza and SARS-CoV-2 , to trace the Tasmanian devil facial tumor disease. The approach they pioneered has opened the door for application to other genetically complex pathogens.

The study, published in the journal Science on Dec. 10, indicated that the devils’ pandemic is shifting from an emerging disease to an endemic one—meaning the disease spread is slowing to the point that each infected devil is infecting only one additional animal or less.

“It is cautiously optimistic good news,” said Storfer. “I think we’re going to see continued survival of devils at lower numbers and densities than original population sizes, but extinction seems really unlikely even though it was predicted a decade ago.”

Since it was first identified in 1996, Tasmanian devil facial tumor disease has reduced populations of the iconic marsupial by 80%. The devils spread the infection when they fight and bite each other on the face. The disease is still largely fatal to Tasmanian devils who contract it, but it appears to be reaching an equilibrium, according to this study which confirms evidence from previous field studies. The authors say this new evidence means managers should re-consider the practice of releasing captive-bred devils into the wild.

“Active management may not be necessary and could actually be harmful,” Storfer said. “It looks like the devil populations are naturally evolving to tolerate and possibly even resist the cancer. By introducing a whole bunch of genetically naïve individuals, they could breed with the wild individuals, basically mix up the gene pool and make it less well-adapted.”

The disease-naïve, captive-bred individuals could also increase transmission of the disease among different groups of devils.

Researchers have relied on field studies and modeling to try to understand the spread of the Tasmanian Devil facial tumor disease, but this is the first time that phylodynamics has been used successfully to trace the transmissible cancer.

Phylodynamics employs genetic sequencing to investigate evolutionary relationships among pathogen lineages to understand and predict how a disease spreads across a population. This method has been used to trace the spread of viruses, including influenza and SARS-CoV-2, which accumulate mutations in their genomes at a relatively fast rate.

The Tasmanian devil facial tumor disease is much more genetically complex than a virus, however. Since the disease is a type of cancer, derived from the animals’ own cells, the genes that need to be traced are essentially the Tasmanian devils’ genes, of which there are thousands more than those of a typical viral pathogen.

In this study, the researchers screened more than 11,000 genes from tumor samples to find genes that changed in a “clock-like” manner, showing mutations that were accumulating rapidly. They then identified 28 genes representing more than 430,000 base pairs, the fundamental units of DNA.

The breakthrough in using this method took months of pain-staking computational work, which Storfer credits to his doctoral student, Austin Patton, a recent WSU Ph.D. graduate who is now a post-doctoral fellow at University of California, Berkeley.

“One of the most exciting advances this study presents is the opportunity to apply these types of approaches to virtually any pathogen,” said Patton. “It opens the door to using the kind of methods that have been shown to be so important in the study of viruses to a whole new suite of pathogens that impact humans as well as wildlife.”

By Sara Saske for WSU Insider