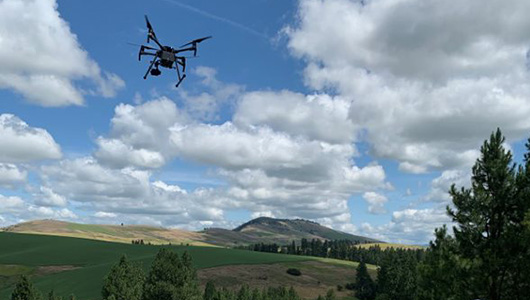 “The state’s program is really a bottom-up approach, where the state encourages local stewardship to improve riparian areas and monitor them,” said Alexander Fremier, associate professor in the School of the Environment (SOE). “Stakeholders, including counties, districts, or landowners, propose areas that they can help improve, then monitor the results of their actions.”

Better known by its shortened name BIOag, the program is designed to aid counties included in Washington’s Voluntary Stewardship Program monitor and report compliance and participation in helping riparian, or streamside, ecosystems.

But doing that monitoring takes time and resources, two things often constrained by small budgets. Enter Fremier and his team, who used publicly available data from satellites and a new program called Google Earth Engine to monitor the riparian regions covering areas much larger than would be possible for people to visit and take measurements.

“Google created a platform to access satellite imagery from the entire globe,” Fremier said. “We can start to analyze those images in real-time using simple computer code.”

The WSU team collaborated on a pilot program with Whitman County and the Palouse Conservation District to test the feasibility of the program, and with the hope of expanding it to other counties involved in the stewardship program.

“We wanted to see how far we could take the analysis and what level of technical expertise is required for people working on the ground to use it,” said Amanda Stahl (’20 PhD Enviro. Sci.), a post-doctoral researcher in Fremier’s lab. “Riparian areas tend to be very narrow, but new technology provides much more detailed satellite photos that are updated at least once a week.”

Stahl helped write code that the district can use to compile future reports on the status of their work. The ultimate goal, one that will require additional grant funds, is to create a mobile-friendly application with a user-friendly interface for the districts to use in creating reports for the state. The team just received the first funds to help write this app.

In addition to the satellite photos, Fremier’s team looked at using unpiloted aerial vehicles (UAVs), or drones, to monitor the same areas. Combining results from the UAVs and satellite images will hopefully provide conservation programs excellent data to show the effectiveness of their sustainability work.

The final report from the initial phase of the BIOAg project is now complete, and Fremier is excited about next steps.

“We’re still relatively early in the process of developing tools for local agencies to use,” he said. “But we think this will have a positive impact and help them direct limited funds to places that will improve the land.”

BIOag is administered through the WSU Center for Sustaining Agriculture and Natural Resources at WSU Pullman.

Top image: Close up of a drone flying above the Palouse landscape.

By Scott Weybright, for School of the Environment and WSU Insider.