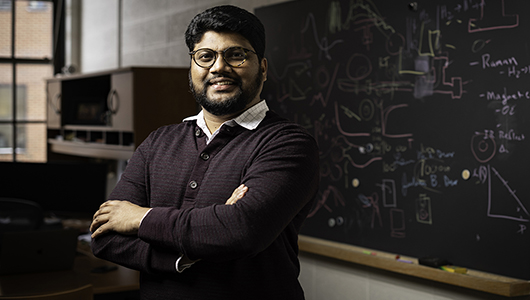 A breakthrough in superconductivity has landed a WSU physics graduate in the latest Time Magazine list of top innovators.

Ranga Dias (’13 PhD) has been named one of 19 innovation leaders in the 2021 Time100 Next list, which highlights emerging leaders shaping the future. His work to develop a room temperature superconductor represents a significant advancement in the field, with wide-ranging applications from transportation to medical imaging, and even hover boards.

“Because of the limits of low temperature, materials with such extraordinary properties have not quite transformed the world in the way that many might have imagined. However, our discovery will get us one step closer to many practical applications,”

Dias said, noting that for the first 100 years after the discovery of superconductors, scientists and researchers could only create them at extremely low temperatures.

His interest in the field of high pressure physics flourished as a PhD student at WSU under the guidance of professor Choong-Shik Yoo, a member of the chemistry department and the Institute for Shock Physics. He opted to join Yoo’s lab after the professor captivated him with the idea of creating a new periodic table within high-pressure environments.

“I remembered that his research was very positive and he was highly motivated and independent,” Yoo said. “Yet, what I had enjoyed the most was to watch his highly skillful hands capable of putting four probes in a 30-mm gasket hole as beautifully as he can paint a work of art with his amazing touches. I think it is this skill with his strong motivation and scientific desires making those challenging multi-megabar experiments highly successful – unparalleled to many others, and has made him successful on his research.” 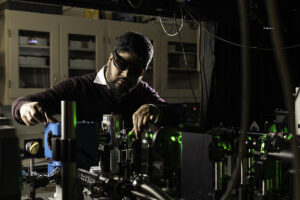 Eager to pursue his dream of furthering his education in the United States, Dias began applying to schools a full year earlier than his colleagues in Sri Lanka typically do. While he was only able to supply schools with a partial transcript, WSU offered him a spot, something no other college in the U.S. did.

Upon arriving in Pullman, Dias found a community eager to embrace him. He found the Palouse a quiet respite perfect for him to concentrate on his studies, with natural beauty to appreciate when he wasn’t studying or working in WSU’s Institute for Shock Physics.

“ISP is a center built for research and is a perfect environment for students to explore their curiosity,” Dias said.

After graduation, Dias went to work at Harvard University in the lab of Isaac Silvera, a foremost figure in the use of hydrogen in extreme pressure environments. From there, he secured a job as an assistant professor at the University of Rochester, where he now oversees a team of 14 students.

Rather than dealing with impractically low temperatures, Dias and his team opted to develop a material formed of highly compressed hydrogen, sulfur and carbon. Atoms behave much like passengers on a subway during peak hours, forming new bonds as a result of their tight corridors. Better understanding these phenomenon will hopefully lead Dias and his team to an ambient pressure, ambient temperature superconductor, what he calls the holy grail of his field.

He credits Yoo, and Regents Professor Yogendra Gupta among several WSU faculty and students who helped him find his passion and pursue his ambitions.

For more information about Dias’ work, Nature has published a story about the discovery of the ambient temperature superconductor.