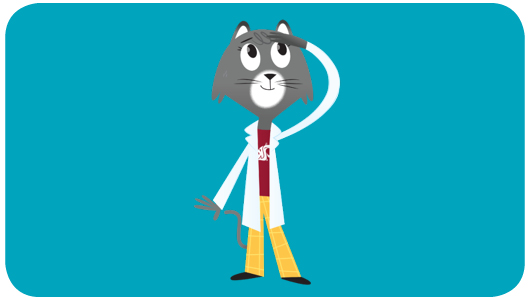 There are all kinds of different birds on our planet, and they migrate to different places.

My friend Heather Watts, a researcher at Washington State University, is really curious about bird migration and told me more about how birds know where to go.

She said there are some birds that make a round-trip flight when they migrate. For instance, the bar-tailed godwit will make long flights between Alaska and New Zealand, traveling more than 7000 miles without stopping.

Meanwhile, a blue grouse makes a much shorter round-trip flight. It migrates less than a quarter of a mile.

Scientists think that some birds may know where to go because of a kind of program that’s built into a bird’s DNA. It’s sort of like being born with a set of directions they know how to use. This genetic information is passed down from bird grandparents to bird parents to the offspring.

“What we think a lot of birds do the very first time they migrate is use a program that tells them what direction to go and how far to go in that direction,” Watts said.

On a bird’s first migration, it may also follow other birds. The next migration season, the bird may be able to use clues from the environment to find its destination.

There’s another kind of migration that has scientists, like Watts, asking lots of big questions. It turns out there are actually birds that do not migrate to the same location every year.

We might see birds like pine siskins breeding in California one year and then in Canada the next year.

Watts and her lab are studying the pine siskins to learn more about the ways these types of nomadic birds migrate and what might be going on behind that behavior.

Different birds may migrate in different ways, but they will often migrate for similar reasons. While there are some unsolved mysteries around migration, one thing we do know is that migration is really important for helping birds find what they need to reproduce and survive.

You know, it can be quite fun to watch all the different birds in our neighborhoods. Here’s a science challenge for you: the next time you go for a walk or gaze out the window, see what birds you can spot. With help from a grown-up, see if you can find the name of the bird online or at the library. Finally, do a little research to find out how it migrates and discover the journey your bird takes.