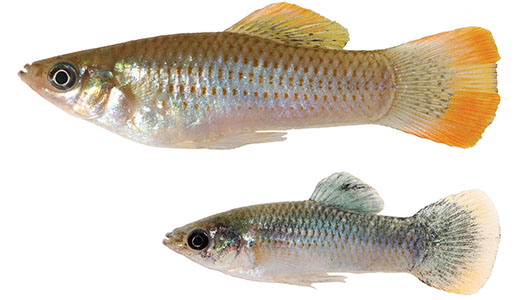 You can take a fish out of toxic water, but its epigenetic mutations will remain for at least two generations.

A research team led by Washington State University scientists analyzed the epigenetics—molecular factors and processes that determine whether genes are turned on or off—of a group of Poecilia mexicana fish, or Atlantic molly, that live in springs naturally high in hydrogen sulfide, which is normally toxic to most organisms.

The researchers removed a sample of fish from the toxic water and bred them in freshwater. They found that the grandchildren of the sulfidic-adapted fish had more epigenetic marks in common with their wild, toxic-water-living grandparents than other Atlantic molly that had always lived in freshwater.

“After two generations in laboratory conditions, the fish generally retained their same epigenetic marks, which was really unexpected,” said Joanna Kelley, WSU associate professor of evolutionary genomics and a corresponding author on the study published in Proceedings of the National Academy of Sciences. “In an evolutionary context, the study shows that these epigenetic marks are fairly stable.”

Hydrogen sulfide is found in nature and as a by-product generated by many human activities, such as paper manufacturing, sewage treatment and gas exploration. For most animals, including humans, it is usually toxic at relatively low concentrations and fatal at high levels. Yet some populations of Atlantic molly have adapted to living in springs with high levels of hydrogen sulfide, while other groups of the same species have remained in freshwater. To Kelley and her colleagues, these fish presented a natural experiment to help address questions of how evolutionary adaptations occur.

For this study, Kelley collaborated with WSU environmental epigenetics and reproductive biologist Michael Skinner, to do the epigenetic analysis. The researchers raised a sample of sulfidic and non-sulfidic fish  in freshwater environments. When the fish produced two generations of offspring, they measured their epigenetic similarities, specifically regions of DNA methylation, a type of chemical modification that can regulate gene expression, turning a gene on or off, without changing the DNA sequence string itself.

“It’s really one of the first examples where we’ve taken an organism out of its normal environment and put it into a different environment and showed that the epigenetics keep being inherited going forward,” said Skinner, also a corresponding author on the paper.

The study also adds to evidence from previous animal research showing that exposure to toxins has epigenetic effects that can last for generations. Skinner’s lab has conducted studies on other wild species, including Darwin Finch in the Galapagos and the New Zealand mud snail as well as laboratory animals, showing that epigenetic changes resulting from environmental toxicants are passed down.

“This is not a one-off, unique species event. This has an impact on everything, including humans,” said Skinner. “Although this is an animal model, it’s a demonstration of how an environmental toxicant can actually shift the epigenetics, and it becomes programmed for subsequent generations.”