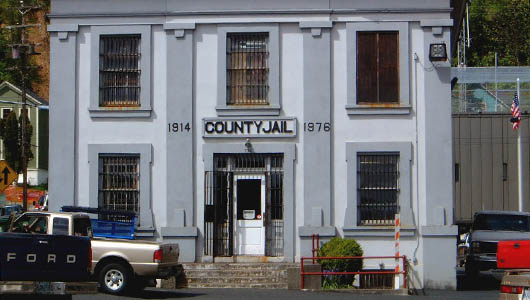 Sociology professor Jennifer Sherman studies rural jails in eastern Washington. Together with fellow WSU sociologists Jennifer Schwartz and Clay Mosher, she investigates why rural jail populations are on the rise despite declines in urban and suburban jails.

“Our research began before the pandemic hit, so we did our best to adapt and used COVID as a natural experiment,” Sherman says. “We learned a lot about the resilience of our communities by watching their responses to the outbreak.”

“One of those things was the impact of being held in quarantine during COVID. These are people who were arrested and [essentially] sent to solitary confinement for up to 14 days, and not even proven guilty,” she continued. “Some introverts were OK with it but for others, it was very difficult and exacerbated already fragile mental health and left them very unstable when they were released.”

The move was viewed by inmates as a penalty for being sick and discouraged them from reporting illness. The upshot was an increase in severe cases, death, and infection rates.

“We emphasized putting incentives in place so people feel safe and secure reporting their illnesses,” WSU epidemiologist Eric Lofgren says. “Jail populations are an important group to think of when we talk about protecting our communities and we want to make sure it’s equitable. Personally, I don’t think anyone should get COVID because they can’t afford bail.”

Unlike prisons, community jails are staffed by local clerks, corrections officers, doctors, and other employees. The inmates themselves are typically released back to their home neighborhoods within days of an arrest. It’s a risky recipe that turned crowded jails into infectious hot zones during the COVID-19 pandemic and helped fuel widespread community outbreaks.

Lofgren, an assistant professor in the WSU Paul G. Allen School for Global Health. took part in a 2020 collaborative study that modeled similar changes in the Allegheny County Jail system in Pittsburgh, Pennsylvania. He says jails are clearly an important part of the super-spreader equation.

“Given the unique COVID-19 challenges for incarcerated populations due to limited social distancing, limited access to hygiene and cleaning products, and a higher rate of existing health issues, we developed a model to reveal how certain interventions can decrease that spread and save lives,” he says.

The researchers found that practices like arrest deferral combined with early release of prisoners resulted in a 15.4 percent reduction of COVID-19 cases in the community and numerous lives saved within the jail system itself.

“We looked at those practices over a broad swath of categories, things like bail-eligible individuals, nonviolent offenders, and those who commit property crimes.”

“Jails are not really built to rehabilitate people,” says Schwartz. “They don’t offer the therapeutic interventions that might be found in prisons. The community and jail populations are the same, the people go back and forth, and these are some of the most vulnerable people in that community.”

“Our question is how can we divert some of those people through means that are actually beneficial to the larger community?” Sherman says. “We feel that community health can be improved by improving the lives of all its members.”

Mosher says if arrest deferrals and early release have little or no impact on public safety, the question becomes, “Are we able to sustain those lower levels of incarcerated people in local jails? Are there other ways we can handle low-risk offenders?”

“On the ground, many people are concerned,” says Sherman. “There is a lot of anxiety about what will happen if we don’t catch criminals. But there’s not much data to show a rise in crime.”

Moving beyond COVID, the sociologists are forming coalitions to address rural jail issues at the policy and local level⁠—issues that are not easily solved by methods used in large urban areas.

“Rural communities have a small tax base and can’t implement things that work well in better-funded regions,” says Sherman. “So, there is often a lack of resources, infrastructure, medical services, mental health, and addiction services.”