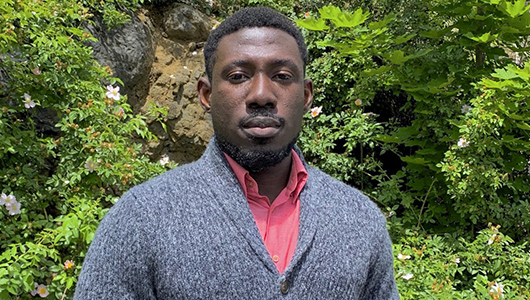 As a seven-year-old, James Owusu Asare developed an unusual hobby: he would sit quietly at home in Accra, Ghana, writing lines of poetry. By age 15, he realized he had a special ability and began to take it more seriously. But when it came time to go to university, Asare decided to study math even though it was his weakest subject as a child.

Today, he’s a WSU Pullman PhD graduate student in mathematics education with a portfolio of more than 300 poems.

Asare began reading at a very young age, taught by his father who was an English teacher.

While Asare was earning his undergraduate degree at Kwame Nkrumah University of Science and Technology, one of his professors introduced him to the wide-ranging work of WSU Vancouver Professor Bala Krishnamoorthy. Krishnamoorthy teaches mathematics and statistics and specializes in computational topology, biomedical informatics, and geometric measure theory.

Asare reached out to Krishnamoorthy to learn more and they began communicating. Asare eventually applied to the Graduate School at WSU Pullman, which has led to a new chain of mentors and supporters in both mathematics and poetry.

Although Krishnamoorthy teaches at the Vancouver campus, he continues to serve as a supportive advisor for Asare and they are in regular contact. Krishnamoorthy said he knows Asare as a strong and sincere worker who “makes his daily schedule down to half hour time slots.”

In addition to his graduate studies at WSU, Asare is continuing to pursue his interest in writing poetry. He reached out to Basheera Agyeman (’18 CES), a fellow Ghanaian and a poet, writer, and scholar in ethnic studies. In turn, Agyeman put Asare in contact with Bryan Fry, a career-track assistant professor of English who specializes in creative and professional writing.

Next, Fry was able to connect Asare with his favorite poet: Kwame Dawes. Dawes has opened new doors for Asare by introducing him to an array of poetry styles and famous poets.

Fry has inspired and pushed him in the right direction with his poetry, Asare said, and Dawes has encouraged him to continue studying academic poetry and find his style.

Asare’s mathematics education career goals are two-fold: he would like to be a professor to show others the power of math and also engage in the mathematics community by helping with industrial projects.

Adapted from the Daily Evergreen article by Eliza Callis