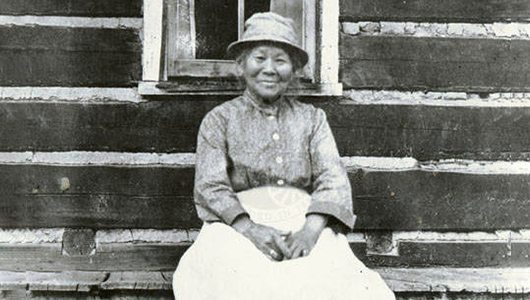 Though often surprising to people today, Chinese immigrants once had a thriving population in the Inland Pacific Northwest. From their earliest days searching for gold to their later work constructing the Northern Pacific Railway, the Chinese endured discrimination and, in many cases, extreme brutality.

When word came that gold had been discovered in central California in 1849, many Chinese headed to San Francisco or “Land of the Gold Mountain” hoping to strike it rich. From there, many traveled further inland along the Columbia, Snake, and Clearwater Rivers in pursuit of gold fields in the mountains. Vibrant Chinatowns sprung up along the way in cities like Lewiston, which at that time was the region’s mining supply center.

“There were several small gold strikes on the North Fork of the Palouse River out beyond Potlatch,” says Phil Gruen, architectural historian and associate professor in the WSU School of Design and Construction. “Like Lewiston to the south, the town of Palouse was a mining center for the region supplying prospectors with clothes, food, and equipment.

“Discrimination and violence against the Chinese began in San Francisco but it has been repeated time after time all across the nation.”

Along the North Fork of the Palouse River, up in the Hoodoo Mountains, one of the Inland Northwest’s most heinous cases of violence toward the Chinese occurred on what is now called Strychnine Creek.

According to a book by Eddy Ng (’76 Asian studies, ’79 MA history), From Sojourner to Citizen: Chinese of the Inland Empire, the incident occurred around 1889 near what is now Laird Park. White miners had abandoned a small gulch after extracting gold there proved difficult and unprofitable. The Chinese miners, as they often did, came in behind them to work the tailings. They dug ditches to carry enough water for the sluicing—or sand washing—operation and were rewarded with a rich take. They also used this water for washing and cooking.

Watching in dismay, the White miners grew angry and devised a plot to take back the site. To avoid bloodshed, they decided to poison the Chinese by putting strychnine in the ditch. Their plan was successful, and an unrecorded number of Chinese suffered an excruciating death. The White miners then destroyed their camp and stole the gold.

While the first Chinese immigrants came to the United States in hopes of finding gold, many more found gainful employment in the construction of the Transcontinental Railroad. They also played a critical role in building the Northern Pacific and Great Northern Lines.

“In the 1880s, the Northern Pacific Railroad came through this area and crossed the Snake River,” says WSU Tri-Cities history professor Robert Bauman. “Pasco became the largest railroad hub in central Washington [and] was a community largely of railroad workers, including 300 Chinese laborers.”

In a 1982 article in Bunchgrass Historian, author William Wilbert says the first Chinese to arrive in Washington Territory were generally admired and well tolerated by Whites. But the peaceful sojourners were soon taken advantage of.

In many ways, Wilbert writes, the Chinese were punished by the dominating White class simply because of their diligent work ethic. Whites often grumbled that the Chinese worked for day-laborer wages that no person of European descent could survive on. By the 1880s, as competition for unskilled labor grew fierce, White workers began forcing the Chinese out with cries of, “The Chinese must go!”

Rory Ong, third-generation Chinese American and WSU associate professor of comparative ethnic studies, says this kind of discrimination can be traced back to the 1790 Naturalization Act, which limited citizenship in the United States to White immigrants only.

“Basically, we decided it was only going to be free White men who were going to be citizens of the US,” says Ong. “That meant they were landowners or had some other wealth, came from western or northern Europe, and were male. This set up centuries-long conditions to bring in the ‘right’ people for the democracy. When Chinese immigrants started coming in for work, they didn’t fit the bill.”

Ong says the Chinese were often dismissively referred to as “The Heathen Chinee” or “Sons of Confucius.” Additionally, Chinese immigrants who planned to save money and return to their homes in China tended to keep to themselves, retaining their simple blue tunics, queue pigtails, and traditional religions. This apparent lack of interest in the majority culture aroused suspicion and fear in more than a few White Americans.

Businessmen, however, saw the Chinese as an opportunity to cut labor costs and make more money. The railroad barons, in particular, hired workers directly from China with offers of lower wages than Whites received. Such actions angered Whites who also needed jobs and led to widespread protests of unfair competition from “cheap” Chinese labor.

As a result, Congress passed the Chinese Exclusion Act in 1882, which prohibited unskilled Chinese laborers from entering the United States and denied citizenship to all Chinese already in the country, even those born here.

“It’s the only law we had on the books that was directed toward one particular group,” says Ong. “Later, it was extended to other Asian groups such as the Japanese and Filipinos.”

In 1892, the Exclusion Act was amended, adding the requirement that Chinese must carry a Certificate of Residence, a precursor of the green card system, to prove they had entered the country legally. Those caught without the documents could be detained and deported.

“It wasn’t until China became a US ally during World War II that immigration began loosening up a bit,” Ong says. “With the passage of the War Brides Act in 1945, soldiers were allowed to bring their spouses and children home from other countries. Then came the Immigration Act in 1965, which scholars see as a watershed moment for Asian immigrants. Finally, whole families, siblings, and parents, could come to the US.”

With hard work and a frugal lifestyle, many Chinese Americans successfully established dry goods stores, restaurants, laundries, and vegetable gardens. Over time, they enriched their communities with a heritage that remains vital today.

“I wouldn’t have made a good pioneer,” says Eddy Ng over a cup of green tea at his Colfax restaurant. “I’d say, ‘The hell with it’ and leave! Can you imagine when it’s cold and you have to build the railroad doing really difficult tasks like setting off dynamite? Many Chinese died while building branches of the Palouse railroads. It was a tough life.”

Ng, owner of Eddy’s Chinese and American Restaurant is fourth-generation Chinese American, although he didn’t come to the United States until his teens.

“We are from the Toishan area of South China,” he says. “I grew up in Hong Kong due to complex political reasons; my family was scattered all over the world.”

Over the years, many of his family members reunited in the Inland Northwest.

“My great-grandfather, Gin Sing Ng, was born in San Francisco and traveled to Seattle by train,” says Ng. “From there he moved to the Lewiston Chinatown where he worked at a 24-hour operation called the Majestic Café. At the time, men had to return to China to wed and couldn’t bring their wives to the US until after World War II.”

It was Ng’s great-grandmother who managed to take young Ng out of the People’s Republic of China after the government imposed a lockdown and shut the Bamboo Curtain in 1949. Her husband, Gin Sing, had passed away in America, so she was eligible to move to Hong Kong, which had a US consulate, and was allow to bring her grandson, too.

“Later, as a teen, she asked me to take her to America so she could be buried next to her husband. I wrote to my folks who were legal immigrants and asked them to apply for us to come to the US. And that’s how I came to Colfax where my dad and mom worked for the Colfax Coffee Shop.

“In the beginning, I wasn’t used to the small-town life and I was surprised to learn there had been Chinese in Colfax in the early years,” he says. “They mainly did laundry and there was a Chinese vegetable garden. Then, they disappeared. The old men went back to die in China.”

Today, the Ng family feels at home in the little town of Colfax, where people are supportive and have made them feel part of the community.

“I’m so proud—we are here and diversified and able to help kids understand other ethnic groups,” Ng says. “I believe we’re a positive influence and when the kids grow up, they realize there’s nothing to be afraid of. Their minds are open to learning about different cultures and ideas and it’s good for them. I think education is key.”

Adapted from “How Chinese pioneers helped build the Pacific Northwest” in Washington State Magazine. Read the full story by Rebecca Phillips in the Summer 2021 issue.