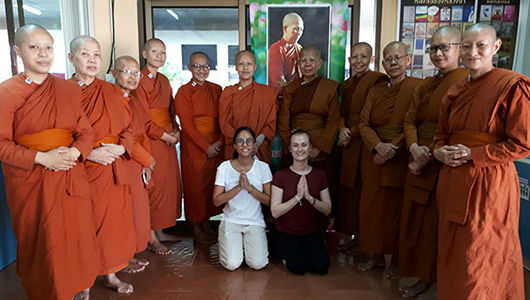 Anthropology doctoral candidate Daphne Weber is headed to Thailand as WSU’s first recipient of a Fulbright-Hays award, part of the renowned Fulbright suite of awards.

Weber will spend a year living with and interviewing Thai female monks, formally known as bhikkhuni. She will conduct extensive research for her PhD dissertation on the healing effects of ordination. While female monks are recognized in East Asia, where people mostly practice Mahayana Buddhism, bhikkhuni are not officially recognized within the predominately Theravada tradition of Southeast Asia.

The Fulbright-Hays is uniquely funded by a Congressional appropriation to the U.S. Dept. of Education. The award supports research and training efforts overseas that focus on non-western foreign languages and area studies. Weber’s award is in the category of Fulbright-Hays: Doctoral Dissertation Research Abroad.

Depending on COVID-19 protocols in place at the time, Weber plans to arrive between January and March 2022 at Thailand’s first all-female temple—Songdhammakalyani Monastery—in Nakhon Pathom, about 47 kilometers by train west of Bangkok. During her research period, she hopes to also visit the monks’ annual ordination ceremony in Sri Lanka.

Returning to the monastery

Weber has been to the monastery on two previous trips, having gathered information for her WSU master’s thesis, which was also on Thai Bhikkhuni. Her faculty mentor is Julia Cassaniti, associate professor in the Dept. of Anthropology in the College of Arts and Sciences. Cassaniti is a former recipient of a Fulbright-Hays award.

A Lincoln, Nebraska native, Weber became interested in Buddhism while in junior high. Originally headed to college to become a lawyer, she explored many majors and “discovered a passion for anthropology.” She earned bachelor’s degrees in anthropology/women’s studies and history/leadership at Kansas State University.

She took courses on Southeast Asian religions and read about Buddhist nuns but found few sources containing interviews with the actual, ordained women. Determined to record their histories, she pursued graduate studies with Dr. Cassaniti at WSU. She attended three years of Thai-language study at the University of Wisconsin-Madison.

To collect data, she spent several weeks over two summers living with the bhikkhuni. To garner the monks’ trust, she followed their strict routines and rules, including wearing all-white garments, chanting and praying twice daily, and regularly landscaping the temple grounds. By the end of the summer trips, she used the two free hours in the evenings to ask women about their life history and decision to ordain.

When her master’s thesis was complete, she sent a copy to the monastery’s abbess. Though she received minimal comments on the text, Weber learned the women displayed the translated version on their community bulletin board. She also gifted them an honorary graduation sash to commemorate the work and relationships they built together.

Grateful for the Fulbright-Hays

The Fulbright-Hays award makes it possible to continuously live in the temple for a year and gives Weber the opportunity to more fully explore the women’s personal histories and what makes the temple a site of healing.

“Some bhikkhuni describe the temple telephone as a ‘hotline’ for women voicing issues of illness, abuse, or suicide,” she said. “I want to explore how the temple sets itself up as a place of refuge and why these very special female monks are called on for support, in addition to why the women themselves chose to ordain.”

With her PhD in hand, Weber plans for a career as a professor.

“Anthropology opened me up to the human condition and how variable it can be,” she said, hoping to one day host study abroad opportunities for others. “Everyone in the world brings something unique to the table. I’m thankful for the Fulbright-Hays so I can share the story of these incredible female monks. I’m honored to do that.”

As WSU’s first Fulbright-Hays recipient, Weber will be featured in the Distinguished Scholars Gallery in the Compton Union Building on the Pullman campus. There, the names and photos of nearly 325 WSU recipients of prestigious awards—such as the Fulbright, Goldwater, Rhodes, and more—since 1907 are featured.

The Distinguished Scholarships Program provides mentoring and assistance to many award applicants. The program is part of the Division of Academic Engagement and Student Achievement in the Office of the Provost and Executive Vice President.

By Beverly Makhani for WSU Insider