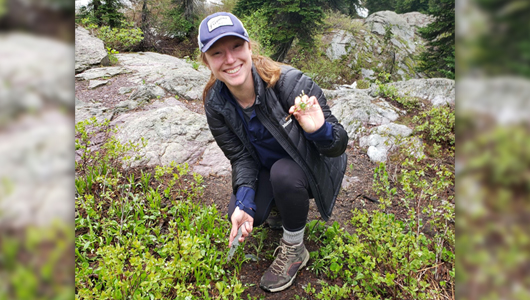 Carney is currently reconstructing the cultural history and plant food used by Northwest Native communities, specifically camas (Camassia quamash), a bulb plant that has been a valuable food for tribal communities for thousands of years. A key food source in Northwest Native diets, it may at one time have equaled the importance of salmon. 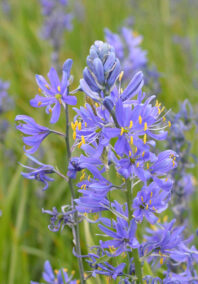 “Native people managed and harvested camas bulbs for more than 4,000 years,” said Carney, who earned her PhD in archaeology this spring. “They were not passive hunter gatherers, but had intimate knowledge of control over plant lifecycles in a manner that is quite different than our concept of agriculture today.

“When harvesting, Native Americans selected only mature camas bulbs. They weren’t looking for bigger bulbs or early matures, but considered the long term for the plant itself. This approach was quite calculated with enduring sustainability in mind.

“Native people always thought about who came before and those who came after them.”

Connections built on a foundation of respect

In her work, Carney partners with industry professionals, academics, and representatives from the Kalispel Tribe.

“One of the accomplishments I’m most proud of is the relationship I’ve established with the Kalispel in northeastern Washington,” she said. “Native voices are often ignored, and I’ve worked in my research and collaborations to ensure their voices are included in interpretations of the past.”

Fundamental to Carney’s relationship with the Kalispel is an understanding of their reverence for the past, which is woven through their lives and culture.

“We held a science day with the Kalispel summer camp and I saw how important it was for tribe members to hold something their ancestors had touched,” Carney noted. “One of the kids said, ‘My ancestor really held this.’ 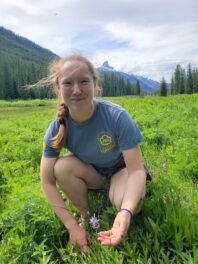 “When you work with tribal communities, it’s important to include the past because it’s so relevant to their identities.”

Respect for this cultural legacy has been frequently disregarded by scientists, Carney noted. Many initiate relationships with Native people to conduct research on their lands. But, once the work is complete, they depart and leave those connections in the dust.

“We have a lot to do in this field to rectify those broken relationships and promises,” Carney said. “I wouldn’t want to work on any type of archaeology, if I didn’t have the full approval and blessing of the communities I collaborate with. This is an ethical, moral process.”

Carney plans to remain in the Northwest to cultivate and sustain her relationships with Native communities into the future.

“Molly will eventually work with other tribes,” said Kevin Lyons, cultural resources program manager, Kalispel Tribe of Indians. “She’s building a reputation for respecting the relationship of Native culture to their ancestors and the environment.”

Through their research, Carney and her team contribute to a vital need among Native communities: food autonomy.

For centuries, traditional food sources of North American tribal people have been disrupted by Euro-American food systems. The loss of food sources, along with the land to cultivate them, has had a negative impact on their food security, overall health, and economic revenue.

Native food autonomy is a national initiative in which tribal communities are reclaiming self-determination over their health and cultural heritage through efforts to increase access to healthy, traditional foods and create opportunities that spark entrepreneurship.

Lyons says that this autonomy and self-determination is achieved through an informed understanding of the variables of food value, food safety, and sustainable accessibility.
Camas is one of the foods at the center of food sovereignty initiatives.

“The goal is to be able to take what we’ve learned about camas production and contribute to food sovereignty by offering Native communities autonomous, healthy food options,” Carney said.

Lyons recognizes Carney’s contribution to the Kalispel through her work and research.

“Molly has grown to be a true peer and leader in her relationship with the Kalispel and brings ideas to us that will help us grow,” he said. 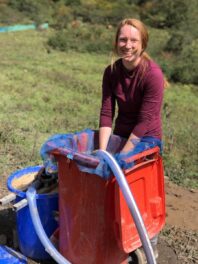 Carney’s work has also been recognized through funding at WSU and other organizations.

During her time at WSU, she was awarded nearly a dozen scholarships and grants, including the Harriett B. Rigas Outstanding Woman in Doctoral Studies Award and the Janet Friedman Memorial Fellowship.

In July, she began a three-year Washington Research Foundation (WRF) Postdoctoral Fellowship. The WRF awards 10 fellowships a year to fund STEM projects by promising researchers, including many from WSU.

“This fellowship grants me the support to get my traditional foods research off the ground and running,” Carney said. “It’s really peace of mind, so I can focus on research and relationships with Native communities without having to scramble for money.

“The fellowship also validated that my work is meaningful. Camas continues to have relevance in the present and is worth conserving for the future.”

WSU is the host institution for Carney’s fellowship, and she says it is an ideal partnership. For example, in 2018, the Provost Office established Memorandums of Understanding with 12 Northwest tribes. These are designed to support positive relationships with Native communities throughout the region. WSU offers extensive resources to conduct the research, including the Francesci Microscopy and Imaging Center, which houses high-resolution microscopy equipment integral to Carney’s camas project. The Museum of Anthropology holds collections and samples that can be accessed for her work.

Across the spectrum of her endeavors, Carney is an advocate for those whose voices are not valued or heard. She believes multivocality and inclusiveness are key to achieving equity for people from underrepresented groups.

“In archaeology, we have ingrained biases about the past because we haven’t gotten others’ perspectives and interpretations,” she said. “I’m committed to reconceptualizing this archaeological record to be more inclusive by bringing others’ ideas into the conversation. I’m also driven by an overarching goal to create space and encourage students of all backgrounds to pursue education and archaeological careers.

“I aspire to work at a university in the Northwest – teaching, conducting research, and most importantly, mentoring students.”

About the camas plant

For at least 4,000 years, the camas (Camassia quamash) has been an important plant food for the Kalispel and other tribes throughout the coastal and interior Northwest. The nutritious root plant grows prolifically along the margins of Calispell Lake and the Pend Oreille River.

In the spring, its blue flower blankets the meadows in the region from eastern Washington to northern Idaho. In June and July, when the blue flowers have gone to seed, the ripe camas are harvested. These seasonal harvests help the camas fields continue to flourish. Only the larger bulbs are collected, while the smaller roots are returned to the soil to ensure next year’s harvest.

The camas flowers are used by Native Americans for medicinal purposes, while its carbohydrate-rich root bulbs are collected and fire-baked for use in a number of recipes, including bread. Camas can also be dried, preserved and stored.