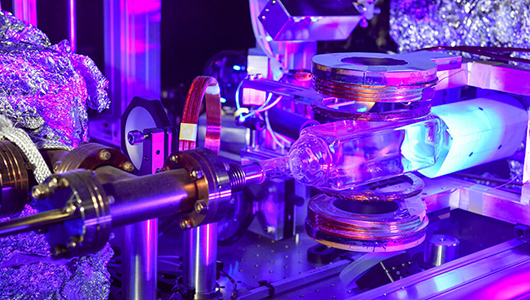 When cooled to almost absolute zero, atoms not only move in waves like light but also can be focused into shapes called caustics, similar to the patterns light makes on the bottom of a swimming pool or through a curved wine glass.

WSU physicists have developed a technique to see these matter-wave caustics by placing attractive or repulsive obstacles in the path of a cold atom laser. The results are curving cusps or folds, upward or downward “V” shapes, which the researchers describe in a paper for Nature Communications.

While it is foundational research, these caustics have potential applications for highly precise measurement or timing devices such as interferometers and atomic clocks.

“It’s a beautiful demonstration of how we can manipulate matter waves in a way that is very similar to how one would manipulate light,” said Peter Engels, WSU Yount distinguished professor and the paper’s senior author. “An atom is accelerated by gravity, so therefore, we can mimic effects that would be very difficult to see with light. Also, since atoms respond to many different things, we can potentially exploit this for new types of sensors that are particularly good at detecting magnetic fields, gradients in electric fields or in gravity.”

To achieve these effects, first the scientists had to create one of the coldest places on Earth, which they were able to accomplish in the Fundamental Quantum Physics lab at WSU. Engels and his colleagues used optical lasers to take energy out of an atomic cloud trapped inside a vacuum chamber, cooling it very close to absolute zero (−273.15 degrees Celsius or −459.67 degrees Fahrenheit).

This extreme cold makes atoms behave quantum mechanically in ways very different from the familiar laws of nature. In these conditions, instead of behaving like particles of matter, the atoms move like waves. Clouds formed of such atoms are known as Bose-Einstein condensates, named after the theorists whose work first predicted this state of matter, Albert Einstein and Satyendra Nath Bose.

In the process of exploring these condensates, the researchers at WSU created a cold atom laser, meaning the wave-like atoms started lining up in a column and moving together.

“A light laser is a collimated, coherent stream of photons, and we’re essentially doing that with atoms,” said Maren Mossman (’12 BS, ’19 PhD) , the paper’s first author who worked on the project as a WSU post-doctoral fellow and is now the Clare Boothe Luce assistant professor of physics at the University of San Diego. “The atoms sort of walk together and behave as one object. So then, we decided to see what happens if we poked this.”

For this study, the researchers ‘poked’ at the atom laser by putting optical obstacles in its path, essentially shining specific wavelengths of laser lights onto the accelerating stream of atoms. One obstacle type repelled the atoms and made caustics in downward fold shapes; another attracted them making caustics in upward cusp shapes.

The system is also very tunable, the researchers said, meaning they can change how fast the atoms accelerate.

“Caustics in atom lasers have never really been studied with this flexibility,” said Engels.

In addition to Engels and Mossman, the co-authors include Michael Forbes, WSU associate professor in the Department of Physics and Astronomy and Thomas Bersano, a former WSU post-doctoral fellow now at Los Alamos National Laboratory. This study was supported by grants from the National Science Foundation.