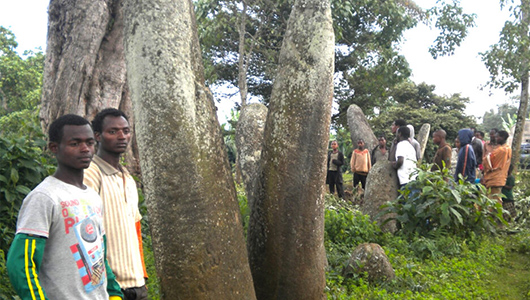 Rising as high as 20 feet, ancient stone monoliths in southern Ethiopia are 1,000 years older than scientists previously thought, according to a new study in the Journal of African Archaeology led by Ashenafi Zena (’19 PhD).

“This is one of the most understudied archaeological sites in the world, and we wanted to change that,” said Zena, who is now at the State Historical Society of North Dakota.

The only other attempt to determine the age of the more than 10,000 stele monoliths located at various sites in the Gedeo zone was conducted by French scientists in the 1990s. It provided a far more modest construction date of around 1100 A.D. for the monuments of Tuto Fela in the northern part of Gedeo.

Under consideration as a UNESCO World Heritage Site, Sakaro Sodo and other archeological sites in the area have the largest number and highest concentration of megalithic stele monuments in Africa. The standing stones range widely in size, function, and arrangement in the landscape.

While many of the monoliths have fallen and/or are undecorated, a few have intricately wrought faces and other anthropomorphic designs carved into the stone that can be seen today. Despite the impressive nature of the archeological site, little is known about why or how the monoliths were built.

An Ethiopian native, Zena originally decided to conduct a study of the stones after traveling to the region with his doctoral advisor Andrew Duff, a WSU professor of anthropology, in 2013.

“It was shocking to see such a large number of monuments in such a small area,” Zena said. “Looking at the stones, many of which had fallen to the ground and some have broken into pieces, I decided to focus my dissertation work there instead of investigating cave sites in southern Ethiopia.”

In addition to pushing back the date of the earliest monoliths’ construction by a millennium, the researchers also determined where the ancient builders of the site likely quarried raw stone for the project. They also identified, for the first time, the earliest known sources of obsidian artifacts that were recovered from the Gedeo stele sites.

Surprisingly, most of the obsidian the researchers identified at Sakaro Sodo originated some 300 km away in northern Kenya, illustrating that the people at Sakaro Sodo obtained most of their obsidian raw materials through some form of exchange or trade.

While little is known about the pastoral and/or agricultural people who populated the Sakaro Sodo region of southern Ethiopia at the turn of the first millennium, the new construction dates of the stele monuments identified by Zena and Duff appear to coincide with the arrival of domesticated animals in the region and the beginnings of more complex social and economic systems.

“One of the reasons why this research is important is because it has the potential to shed new light on what the earliest people in this area were doing for a living as well as what their cultural and social practices were,” Duff said.

Existing archaeological, ethnographic, and living megalithic stele traditions in the region suggest that the oldest stele sites in Ethiopia at Sakaro Sodo and other nearby locations were likely created for two purposes: to commemorate the transfer of power from one generation to the next or to record and commemorate group achievement.

“The diversity of function of the stele in Ethiopia is really fascinating,” Duff said. “For example, we know that the more recently constructed stele monuments of Tuto Fela in the north part of Gedeo were used as burial markers. While the linear placement pattern of the earliest stones at Sakaro Sodo makes us think they may have been markers to signify the passing of generational leadership.”

While the political situation and the recent escalation of the COVID-19 pandemic in Ethiopia make following up on the investigation in the near term difficult, the researchers have several future projects in the works that they hope to continue as soon as possible.

One project involves more additional archeological investigations at other stele sites in the areas with colleagues at Addis Ababa University in Ethiopia. The other is a project led by Duff and current WSU doctoral student Addisalem Melesse who are working with the Ethiopian Department of Archeology and Heritage Management to determine how the stele sites can be better managed to both preserve the heritage of the region and generate tourism.

“Developing a better understanding of the function of these stones and how they were erected is really useful in terms of gaining a UNESCO World Heritage designation,” Duff said. “This could in turn help generate tourism revenue, which is a major economic factor for the country.”

Top photo: Sakaro Sodo pictured in 2014. Under consideration as a UNESCO World Heritage Site, Sakaro Sodo and other archeological sites in the Gedeo zone have the largest number and highest concentration of megalithic stele monuments in Africa (photo by Ashenafi Zena).