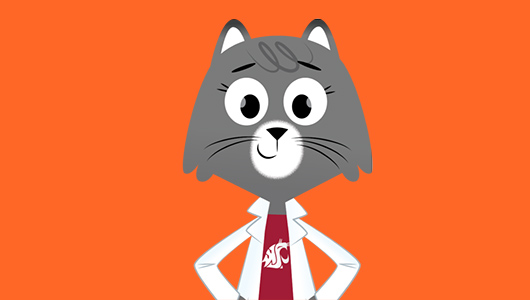 When humans want to look into the past, they often dig into the ground. Under the soil, archeologists can find all kinds of things that help us learn about life long ago.

That’s what I found out from my friend Rachel Horowitz, an archaeologist at Washington State University who is very curious about the lives of our human ancestors.

She said part of the answer to your question lies in some important processes that happen above and below Earth’s surface.

Let’s say a human ancestor passed away and was buried at the edge of a lake. Layer after layer, the soil, pebbles, sand and other earth materials start piling up on top of the burial site.

Over thousands of years, the layers create a lot of pressure and heat which can eventually turns all those different materials into rock.

All of these layers create a lot of pressure and heat which eventually turns all those different materials into rock. Meanwhile, there’s another process at work that helps transform the human ancestor’s bones.

Inside of a bone, there is a soft material called marrow. Over thousands of years, the marrow gets replaced with minerals. Maybe you’ve heard of minerals like calcium, zinc or sodium.

As water moves through the soil, it brings some important minerals to the bone. The minerals replace the marrow. When this happens, we get a fossil. Fossils might look a lot like bones, but they are now rock—and we can learn a lot from them.

Some of the fossils that have taught us about the past were bones belonging to a human ancestor that archeologists named Ardipithecus ramidu. Or Ardi, for short

Archeologists found Ardi at a dig site in Ethiopia more than a decade ago. A study of her bones revealed she likely lived about 4.4 million years ago. Scientists continue to study her skeleton and ask questions about what her life might have been like in the past.

Horowitz told me that we can also find other things besides traces of bones. For instance, some archeologists have found fossils of poop, which are called coprolites. They have also found fossils of teeth. These kinds of fossils can help scientists learn more about what animals and humans used to eat.

Archeologists have even found fossils of human footprints that have been preserved in stone. We can also find things in the earth that don’t fossilize, including stone tools, scrolls, coins and pottery.

All of these different fossils and remains can help scientists put together a better picture of history on our planet. Of course, you never know what someone might dig up next. It might add a new chapter to the story or change the way humans think about life long ago. Who knows, maybe one day you can be an archeologist or a historian and help us discover something new about the past.