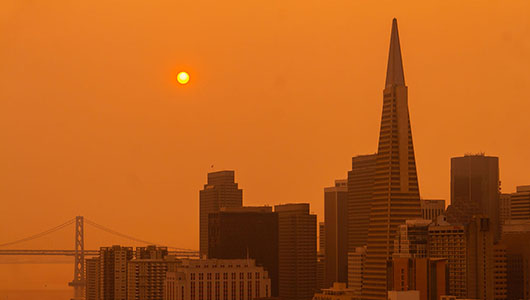 Large wildfires and severe heat events are happening more often at the same time, worsening air pollution across the western United States, a study led by Washington State University researchers has found. In 2020, more than 68% of the western U.S.—representing about 43 million people—were affected in one day by the resulting harmful-levels of air pollution, the highest number in 20 years.

“We have seen an increasing trend in the past 20 years of days when high-levels of both particulate matter and ozone are occurring simultaneously,” said lead author Dmitri Kalashnikov, a WSU environmental sciences doctoral student. “This is tied to two things: more wildfires and increases in the types of weather patterns that cause both wildfires and hot weather.”

The study, published in Science Advances, found that such widespread air pollution events are not only increasing in frequency but also persisting longer and affecting a larger geographic extent across the region. They have become so bad that they have reversed many gains of the Clean Air Act. The conditions that create these episodes are also expected to continue to increase, along with their threats to human health.

When wildfires and extreme heat occur at the same time, they magnify air pollution: wildfire smoke increases fine particulate matter in the air and the heat combines the smoke and other pollutants to create more ground-level ozone. While in the stratosphere ozone is protective, ozone that forms at the ground level has long been recognized as harmful to human health. It’s a major component of smog, and reducing it was a major goal of clean air policies in the twentieth century. Simultaneous exposure of millions of people to high levels of both pollutants, ground-level ozone and particulate matter, poses a substantial public health burden.

Weather patterns called high-pressure ridging, more commonly known as heat domes, occur when an area of high-pressure air lingers over a region trapping warm stagnant air and its pollutants on the ground. These conditions typically lead to higher levels of harmful ground-level ozone during summer months. Particulate matter affecting air quality used to be more common in the winter in the western United States, but wildfires have flipped that dynamic, bringing the dangers of both particulate matter and ground-level ozone together at the same time in the summer.

For this study, the researchers tracked air quality by using all available monitoring station data from 2001-2020 from across the western states as well as parts of Canada. They combined this data with wildfire information derived from NASA satellites along with ERA5 weather data produced by the European Center for Medium-Range Weather Forecasts.

The co-occurring events were defined as days that registered in both the top 10% in particulate matter levels and top 10% in ozone. The researchers found that annual population exposure to these extreme combined episodes is increasing by approximately 25 million person-days a year– a figure that counts the number of people affected as well as the number of days they were impacted by the air pollution.

“From every indication we have, the hotter, drier conditions projected for this region are likely to increase wildfire activity and contribute to more widespread, severe heat, which means we can expect to see these conditions happen more often in the future,” said co-author Deepti Singh, assistant professor at WSU Vancouver. “Preparing for these events is really important. We need to think about who is exposed, what capacity there is to minimize that exposure, and how we can protect the most vulnerable people.”

These events could potentially be mitigated by taking measures to slow the temperature rise caused by climate change as well as better managing wildfires, such as through prescribed burns. Aside from those efforts, Kalashnikov and Singh suggested treating these air pollution events like a severe snowstorm or heatwave by making sure people have shelters with air quality filters where they can go to get out of polluted air. They also recommended adopting policies that minimize workplace exposure for people who typically work outside.

The size of the simultaneous air pollution events will make it difficult for many people to avoid their impacts, Singh said.

“If there’s such a large region that’s being affected by this air pollution, it really limits where people can go to escape those conditions,” she said. “You could travel a hundred miles and still not find air quality that is any better.”

Top photo: Unhealthy air in downtown San Francisco due to the Napa Glass fire, one of the many large wildfires in 2020. Photo by Bjorn Bakstad