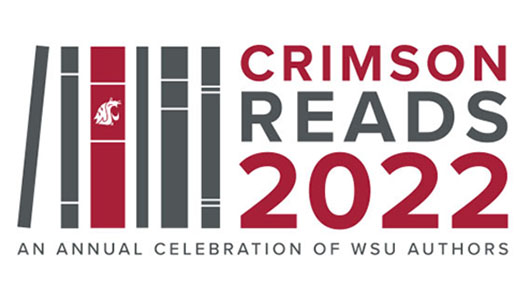 Three speakers, including a history alumnus and an English faculty poet, kicked off the WSU Libraries’ “Crimson Reads” event in March 2022. The annual showcase highlights the diverse publishing activity and achievements of WSU authors who have authored, co-authored, or edited a book, including e-books, within the past year.

As part of WSU Showcase, the annual celebration of excellence throughout the University, Crimson Reads acknowledges and honors works by faculty, students, staff, alumni, and retired university community members.

In the Night Field charts the complex relationship between mental health and place, “mapping the emotional coordinates of physical locations as a way of making legible the intimate regions of memory and of better understanding those memories: their startling artistry, varied discontents, and casual fallibilities,” McGill said.

“The book was influenced by the instrumental compositions of composers Nils Frahm and David Wenngren. Their music inspired landscapes beyond the ones I was writing about—poems became a script for the songs and songs an accompaniment to the poems. This moved me beyond the latitude/longitude of place to approach more directly the emotional coordinates of memory.”

Coming Home to Nez Perce Country follows the journey of the earliest documented collection of Nez Perce artifacts, from the items’ acquisition by a Presbyterian missionary in 1847 to the Nez Perce Tribe’s purchase of the collection in 1996. The book also examines the ethics of acquiring, bartering, owning, and selling Native cultural history, as Native American, First Nation, and Indigenous communities continue their efforts to restore their exploited cultural heritage from collectors and museums.

The book started as a chapter of a dissertation in Bond’s graduate writing course at WSU in 2014. “The research on what was then the Spalding-Allen Collection developed into a close collaboration with [the Nez Perce Tribe’s] Nakia Williamson-Cloud,” Bond said. “The story of the collection and its renaming to Wetxuuwiitin led to a series of events that resulted in a $608,100 refund to the Nez Perce Tribe. This research highlights the ethical issues of who owns Native American material culture and argues that these objects need to come home to the communities that created them.”

Nakia Williamson-Cloud reflected on the continuing efforts of the process detailed in Bond’s book, engaging with history, and, as the Nez Perce elders advise, “always remember the things that happened in the past, but we carry on utilizing the knowledge we have that ties us to things that are greater than ourselves and our individual families or places in society.”

According to Williamson-Cloud, Bond’s book is more than a collection of ethnographic materials, it is a story about the lives of the Nez Pierce people and the colonial actions that were pushed upon the tribe to adapt in a way was not beneficial to the people they were at that time.

He looks forward with a lot of hopefulness: “From the time the tribe acquired the items until now has created a lot of opportunity to acknowledge the basic humanity we all share.”

Listen to the speakers at the in-person event (previously recorded).