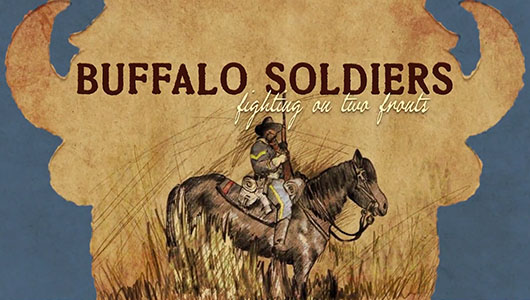 A new documentary about African Americans who fought in the U.S. military in the late 1800s and early 1900s features expert commentary from Ryan Booth, an assistant professor of history at Washington State University.

“Both the Buffalo Soldiers and the Indian Scouts have been waiting a long time for their story to be told,” Booth said. “My hope is that this documentary gives people a better understanding of their contributions to their country as well as the contradictory nature of their service.”

“Buffalo Soldiers: Fighting on Two Fronts” premiered at the Seattle International Film Festival in April. It includes several segments with Booth, who speaks broadly about the military history of the U.S.–Indian Wars as well as the interactions between the African American Buffalo Soldiers and the Native American Indians Scouts.

“Both the Buffalo Soldiers and the Indian Scouts were created by an act of Congress in 1866 and essentially acted as the constabulary for the West up until the advent of World War I,” said Booth (’21 PhD history), whose research specifically focuses on the U.S. Indian Scouts. “The conundrum in all of this is why did Black and Native men take up arms to serve the country that had oppressed them for centuries?”

In the case of the Indian Scouts, Booth explained that certain tribes hated other tribes. The Army knew this and exploited old feuds to motivate members of one group to help them attack another.

“If you went against the federal government, things could go very badly for you,” Booth said. “So, a lot of these men joined out of the hope of getting a better deal and something in return for their family and people.”

Both Black and Native men also joined the U.S. military as a means of survival in a fast-changing and dangerous world.

As Booth wrote in a 2021 piece for Washington State Magazine, the 1800s must have seemed like living inside a tornado—everything upside down and nothing firm to hold onto.

“This was a period where you could be rich and then poor the next minute because the banks went belly-up, and you lost everything,” he said. “By working for the federal government, you were at least guaranteed steady pay once a month in gold or silver coin.”

The Buffalo Soldiers and the Indian Scouts served their country throughout western expansion and in wars up through World War II.

In the case of the Indian Scouts, in 1947 their crossed arrows insignia became the basis of the U.S. Army Special Forces insignia where it lives on to the present day.