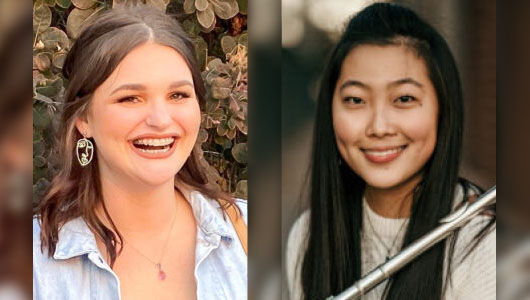 They bring to 63 the number of WSU students and alumni who have received Fulbright awards to study, research, or teach abroad. “Both Annie and Amethyst have detailed plans for their Fulbright experiences that start this fall, and they will be excellent ambassadors in Hungary for both WSU and the U.S.,” said April Seehafer, director of the WSU Distinguished Scholarships Program.

“I am flooded with gratitude to have Fulbright support me in this opportunity to do something I love so much,” said Freibott, who received a Fulbright English Teaching Assistant (ETA) award. She works from Boise as assistant director for the top scholars initiative in the Office of Admissions.

“I’m excited to receive the Fulbright U.S. Student award to study and research abroad,” said Lu. “It’s very rewarding to have years of hard work pay off in this way. I’m lucky to get this opportunity and have a platform to show my work and contribute more.” Lu conducts research into computational mathematical biology with faculty mentor Nikos Voulgarakis.

Freibott (’17 English, with minors in comparative ethnic studies and communication) never planned to be an educator but believes that teaching English to people around the world prepares them to “champion their own narrative, share their story more effectively, and, in turn, accomplish their goals.”  With her Fulbright and working for Educate USA, she will teach English to college students in the cities of Budapest or Veszprem using methods such as storytelling, movies, music, and translation of American stories.

Freibott said she cultivated a love of language and learning from childhood years spent in her parents’ bookstore. Her mother Laura now lives in Deer Park, near Spokane, Wash. Her father, Kenneth, is deceased but was a linguist who spoke German, Japanese, and Spanish.

“I found my own voice by studying English, and I want to help others find theirs,” said the Honors College alumna. She said she hopes that her Hungarian students might consider coming to America for an education because she can leverage her WSU experience with college admissions to help them explore possibilities.

Her time in Hungary will be her sixth international experience. She studied in the U.K. and previously was a volunteer teaching English as a second language in Kenya, Mexico, Myanmar, and the Dominican Republic.

With Hungarian ties from her maternal great-grandmother, Freibott will take her own family on her Fulbright adventure. In May, she will marry fellow Coug and former ASWSU vice president Garrett Kalt (’18 political science and strategic communication) and in September they will move to Budapest.

Lu also values her international ties. The youngest of three children raised in Colorado, she has traveled to China often with her mother Ping Song and father Liangde Lu. They taught her to speak the language as part of the family heritage.

Lu also recently worked at a distance with theoretical physics experts in Berlin as part of a German DAAD RISE science internship. She studied neural networks with coupled phase oscillators. That, plus her undergraduate research with Voulgaarikas, has given her familiarity with developing algorithms related to stochastic processes. With her Fulbright, she said, she will be able to explore the sampling side of those algorithms as well as the Markov Chain Monte Carlo (MTMC) methods working with faculty mentor Istvan Mikos at Budapest’s Alfréd Rényi Institute of Mathematics.

She could apply her findings to genome rearrangements that result in large-scale mutations including gene loss, duplications, or acquisitions which can help explain evolutionary processes. Application of such information, could, for example, help fight against mutations of the COVID-19 virus and prepare for future pandemics.

A National Merit Scholar, Lu chose to attend WSU because of its welcoming environment. In addition to her math major and physics minor, she will also graduate with a minor in music. She plays in WSU’s Flute Choir and Wind Symphony.

Lu has two publications in process related to her research with Voulgarakis—first author on one, second on the other. While Lu plans to be a future mathematician and professor, she is keeping options open as to where she might work—perhaps in biology or in finance as a data analyst, she said.

As part of their preparation to apply for the Fulbright, said Seehafer, both Freibott and Lu received funding from the WSU Distinguished Scholarship Opportunity Fund. That helped them to hire tutors to learn about the Hungarian language and culture.