Three College of Arts and Sciences women were honored for their impact on their communities at the 2022 WSU Pullman Women* of Distinction Awards.

Jan Dasgupta, Amanda Westbrook, and Michelle Kelly were each recognized for contributions to the personal and professional success of women, creating positive social change, and increasing equity on their campus and in their community.

“At WSU, we’re blessed with women leaders that excel in many, many fields while balancing an awful lot of challenges,” WSU President Kirk Schulz said at the awards ceremony. “Our awardees have distinguished themselves in a variety of fields and contributed to the growth and success of other women at WSU. It’s really stunning that we have such talented women at WSU.” 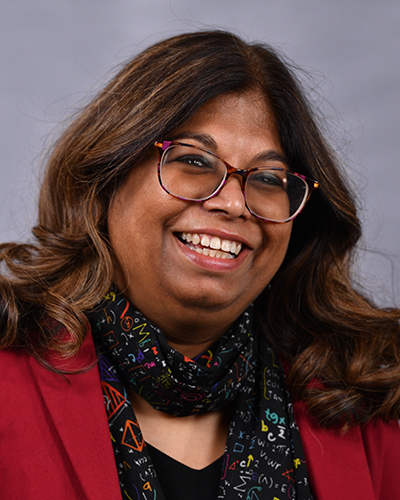 Jan Dasgupta: Woman* of the Year

Boeing Distinguished Professor of Math and Sciences Nairanjana (Jan) Dasgupta was named WSU Woman of the Year for her tireless work in advancing statistics and increasing opportunities for women in the field. Dasgupta has an impressive professional record: she is a fellow in the American Statistical Association, has co-authored more than 60 papers, co-founded WSU’s Center for Interdisciplinary Statistical Education and Research (CISER), serves as the director of WSU’s multidisciplinary and multi-campus Program in Data Analytics, and has advised more than 70 graduate students in her career – more than half of whom are women.

Dasgupta is passionate about advancing women in the field and currently serves as the president of the Caucus for Women in Statistics and is a member of the American Statistical Association’s Council of Women in Statistics. She is also dedicated to increasing data and statistical literacy in historically underserved communities and is developing a series of summer camps to increase data literacy among children and families from those communities.

“I have worked closely with Jan for several years, and throughout I have been impressed with not only her individual achievements but also the depth of her commitment toward advancing women and others not served well by academia and society,” said College of Arts and Sciences Dean Todd Butler, who nominated Dasgupta for the award. “Animating all this work is an indefatigable commitment to justice paired with a hopeful ambition that together we can indeed build a better world.” 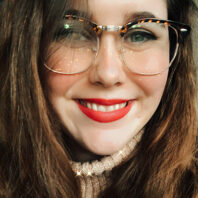 As a WSU Global Campus student, Undergraduate Woman of Distinction Amanda Westbrook balances school, work, and a host of extracurricular activities aimed at enhancing the student experience. Westbrook is an anthropology student who maintains a 4.0 GPA while working full-time in the travel industry and serving as the ASWSUG director of communications and compliance. In that role, she creates content for the weekly Global Campus student newsletter, keeping students informed about campus issues and activities.

In August 2021, she was nominated to speak on a prestigious WSU legislative and congressional panel about her experience as a transfer student in Washington state. She also created Coug Tales, a book club open to all WSU students, and hosts diversity movie nights for students to experience films from different cultures and perspectives. She is a “dedicated student, employee, and leader,” her nominator said. 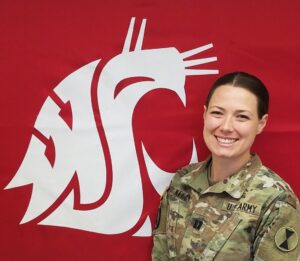 WSU alumna Michelle Kelly knows about service. After completing her undergraduate degree in general studies and the ROTC program at WSU in 2011, she was commissioned in the Army and served on active duty for seven years. During that time she received multiple awards, including the Army Commendation Medal and the Meritorious Medal. After leaving active duty with the rank of captain, she joined the Washington Army National Guard and is currently an instructor with WSU ROTC, leading and mentoring more than 115 cadets and managing the WSU Army ROTC Recruiting Club. She earned her MBA from WSU in 2020.

Kelly is the owner of Michelle’s Closet, a clothing business in downtown Pullman, and is part of the Downtown Promotions Foundation. She has organized multiple clothing drives in recent years and has donated more than 12,000 pounds of textiles to local shelters, LGBTQ+ programs, and other nonprofit organizations. A nominator said that Kelly’s “service and sacrifice for our country, community, and WSU have been nothing short of exceptional and exemplify the spirit of this award magnificently.”

Read about all six of the 2022 Women* of Distinction awardees on WSU Insider.