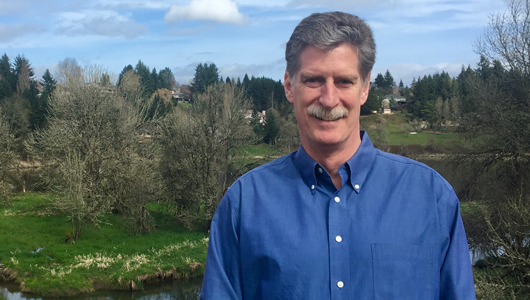 In recognition of his outstanding research on salt and freshwater aquatic systems “that is both timely and important to understanding the impact of global climate change…and biodiversity in the Pacific Northwest,”  Professor Stephen Bollens has been elected to the Washington State Academy of Sciences.

Bollens is a WSU Vancouver professor in the School of the Environment and the School of Biological Science and serves as director of the WSU Meyer’s Point Environmental Field Station near Olympia.

The WSAS is a not-for-profit organization of more than 300 elected members who are nationally recognized for their scientific and technical expertise. Established in 2006 by the state legislature at the request of then-governor Christine Gregoire, WSAS mobilizes the expertise of members, plus a network of partners, to provide independent, non-advocate scientific and engineering assessments of issues that impact the citizens, government and businesses of Washington State.

“It’s wonderful to see the leadership and excellence of our faculty honored by the Washington State Academy of Sciences,” said WSU System President Kirk Schulz. “We are proud to have WSU scientists and engineers advancing the Academy’s mission to inform public policy throughout the state of Washington.”

Read more about Bollens’s research on invasive mussels and the scope of the Meyer’s Point facility.

New WSAS members will be formally inducted at the 15th Annual Members Meeting on Sept. 15.

At that time, John Roll, professor and vice dean of research for WSU Elson S. Floyd College of Medicine, will be moving from the president-elect position to take the helm as the president of the WSAS governing board. Julie Kmec, WSU professor of sociology, will also take a seat on the board as Ronald Mittelhammer, Regents professor in the School of Economics completes his term as board director.

Meet all six WSU faculty elected to the WSAS in 2022 at WSU Insider.