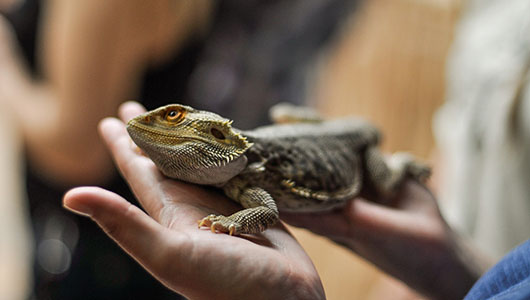 In the wake of a pandemic with ties to the wildlife trade, a research team from WSU and four other universities received a $2.75 million grant to study how biological, social, and economic factors influence the pathogen spread through animal trade networks.

“The global wildlife trade is a major pathway for the spread of diseases that affect both humans and wildlife”, said Jonah Piovia‑Scott, associate professor at Washington State University Vancouver. “Our research focuses on the amphibian pet trade, but we expect it to yield insights about the biological and socioeconomic factors that influence the movement of pathogens through other kinds of wildlife trade networks.”

With more than 2.5 million amphibians imported in the U.S. each year for pets and more than 600 million live animals moving throughout more than 180 nations per year, the need for advanced pathogen detection and mitigation strategies is critical. This is the first study to investigate the bidirectional coupling between socioeconomic factors and pathogen dynamics across a tractable wildlife trade network.

The project is being funded by the Ecology and Evolution of Infectious Diseases Program, a joint program of the National Science Foundation, National Institutes of Health, and the U.S. Department of Agriculture.

Piovia‑Scott is a co‑principal investigator from WSU on the project along with Jesse Brunner, associate professor at WSU Pullman. Both are from WSU’s School of Biological Sciences. Matt Gray, professor at the University of Tennessee’s Institute of Agriculture Department of Forestry, Wildlife and Fisheries, is the lead investigator.

The goal of the study is to identify how socio-economic decisions and pathogen dynamics impact each other in the wildlife trade network, focusing on the amphibian pet trade. The study aims to inform policies that support biodiversity conservation and prevent future pandemics.

The evolution, emergence, and spread of novel pathogens has been widely discussed even before the first case of COVID‑19 was reported in 2019. Many infectious disease outbreaks, like that of monkeypox, chronic wasting disease, and COVID‑19, have been linked to the wildlife trade.

“Our research is focusing on amphibian pathogens in trade but will be used as a model for other pathogens of concern,” Gray said.