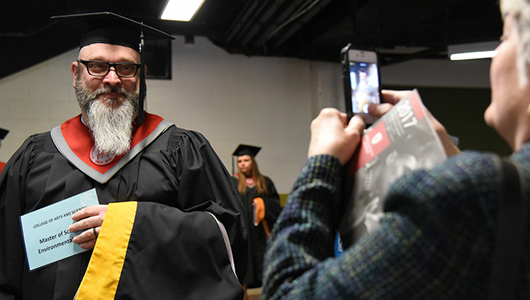 Coming from a family where no one before him in his family had gone to college, he said it was sort of a family tradition that he goes straight into the workforce after high school.

“That’s just what you did in my family,” he said. “I didn’t have a blueprint for college or someone that could tell me about the experience. In some odd way, I felt it wasn’t for me when I was young.”

However, when the recession hit in 2008, he started thinking more about his future and the uncertainty that detailed the availability of jobs that were opened to him without an undergraduate degree. That same year, he applied to Washington State University Tri-Cities, got in, but couldn’t muster up the courage to start his classes. Then in January 2011, with his wife’s hand in his, he walked up the entrance steps to campus to begin his first semester at WSU Tri-Cities.

As the first person in his family to attend college, the beginning of this new college process was daunting. Often times, he said he didn’t feel he was smart enough. But through getting involved with campus programming, student clubs and especially through the development of professional relationships with faculty and staff, he said he found his place and really excelled in school.

“I decided to really submit and give myself to the process,” he said. “Once I started to do that and get involved with things on campus, everything changed.”

While going to school, Schramm worked in the career development office as a career coach and then as a student mentor. He was also involved with several student clubs and served as a member of TRIO, which provides support services for students who are first-generation, disabled or economically disadvantaged.

Meanwhile, Schramm worked heavily with his environmental science faculty mentors to get a grasp of his school work, learning everything he could about his future field. Those same individuals then helped him connect with external professional learning opportunities that paired directly with his coursework.

As an undergraduate student, Schramm completed a number of internships in his academic field. His first was with the U.S. Fish and Wildlife Service, which was followed with an internship with Mission Support Alliance doing biological monitoring. He also did a six-month internship with the U.S. Environmental Protection Agency.

As his combined school and career participation grew, so did his confidence, he said.

Prior to the end of his senior year, he decided to pursue a master’s program in environmental science. Through this opportunity and combined with his regular courses, he got the chance to teach several undergraduate lab courses, which opened his eyes to his love for teaching. He spent the past several summers helping instruct science courses for middle and high school students. He also completed an additional internship, this time with CH2M.

After graduating with his master’s in environmental science last spring, Schramm now works for Washington River Protection Solutions as an environmental quality lead. In addition to his full-time position, and as a way to give back to his time at WSU Tri-Cities, he also continues to teach science courses at the university.

As he looks back on his college years, he said they were the ones that really prepared him for the best version of his professional self that he could be.

“I love being here,” he said of WSU Tri-Cities. “It was hard for me to leave as a student because I did see this place and the people here as family. The personal gratification that I felt through this place, which helped me reach my own desires, dreams and aspirations, stays with me.”

Schramm said he now hopes to inspire in his children, as well as other men and women, to achieve their own aspirations through obtaining a college education. He asked his son recently if he was thinking about college.

“Heck yeah, I think about college all the time,” his son replied.

“I hope to build a legacy for my family and show them that education is important, life-long learning is important and giving back is important,” he said. “Hopefully through this experience, I’m giving them that.”

Top image: Schramm smiles for the camera before commencement.