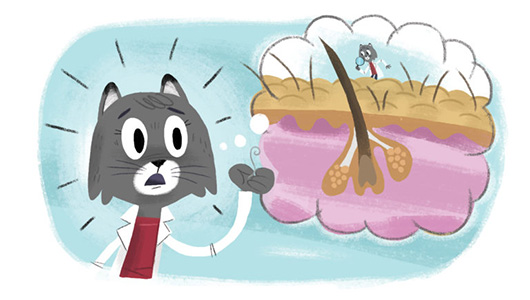 Hair comes in lots of different colors. There’s black, medium brown, auburn, light brown, strawberry blonde, and copper, to name just a few. But in the end, almost everyone will have hair that’s gray or white.

I decided to visit my friend Cynthia Cooper, a biologist and researcher at Washington State University, for help answering this question from Darae, age 10.

Ever since you were born, different cells have been working on your hair. Each hair sprouts from a follicle, a sort of little hair-making factory under your skin. Here, some of your cells are making your hair and others are coloring it.

The cells that color your hair are called melanocytes. They produce a pigment, or natural coloring matter, called melanin. This is the same pigment that gives your eyes and skin their color, too.

A close-up look at cells

Cooper and the other scientists in her Vancouver, Wash., lab are really curious about cells. They are investigating questions about how some cells end up becoming the kind that produce skin pigment.

As people get older, she said, the pigment-producing cells in their hair follicles gradually die. They can no longer make enough pigment to keep coloring their hair.

If we took out all the pigment from your hair, it would be totally white.  So when melanocytes stop producing melanin altogether, your hair turns white.

“Why hair follicle melanocytes die over time, and are not replaced, we don’t entirely know,” Cooper said. “Our skin doesn’t turn gray, so the biology is quite different,” she adds.

Perhaps, you’ve heard someone say their kids are giving them gray hair. But scientifically, if anyone is giving someone gray hair, it’s likely their own parents. Those that come before us pass down their hair color to us through the genes we inherit from them. It’s the same with graying hair.

Scientists have even pinpointed specific genes and parts of cells that are involved in growing gray hair. The new knowledge is helping us put together a better picture of how pigment works. Still, there’s a lot more to discover.

Maybe as you get older and find that first gray hair, you’ll remember some of the science that’s at the root of it all. If you have a cat or dog, maybe you’ll notice that they’ll go gray around their muzzles, too.

I’ve actually had gray and white hair ever since I was a kitten. I think it’s pretty great. Our pigment, or lack of it, help make us all unique.