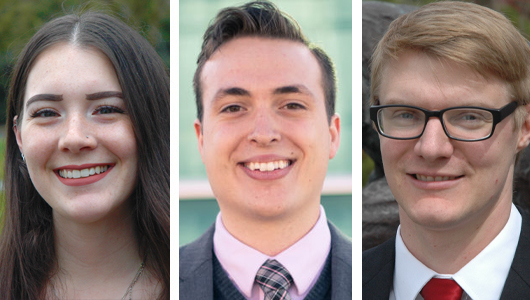 Devon Holze said she “hated math” until she took a class in calculus and discovered she loved it. Around the same time, she also grew passionate about political science, and now believes in the power of combining knowledge in science, technology, engineering, and mathematics (STEM) with the ability to communicate that knowledge to other people.

Holze is among 25 students named Outstanding Seniors of 2019 in the College of Arts and Sciences (CAS). The recognition is based on the students’ remarkable academic performance and service to their respective departments or schools and the University community.

Named Outstanding Senior for the Department of Mathematics, Holze will graduate on Saturday with a bachelor of science in mathematics and a second major in political science.

In addition to her academic achievement, she made leadership and campus involvement a priority. At WSU, she served as a peer-education lead for Cougar Health Services; as an orientation counselor for New Student Programs; as a Cougar Connector for the Office of Admissions; and as a senator and chair pro tempore for the Associated Students of WSU (ASWSU), where she represented all undergraduates in developing projects to enhance campus life.

She served on the President’s Commission on the Status of Women and was president of the WSU In It to End It organization to raise awareness and advocate for the end of modern slavery, especially human trafficking. She is a founding member of RUN WSU, which supports students of color who are running for leadership positions, and a member of Delta Delta Delta sorority and the Asian Pacific American Student Coalition.

Holze also spearheaded a student initiative to increase access to hygiene products in gender-neutral and women’s restrooms and hosted her own radio show on KZUU. Her hard work and contributions have been recognized by various awards, including the President’s Award for Leadership.

“I’m so incredibly grateful that I’ve come to WSU,” said Holze, who hails from Hazelton, Pennsylvania. “I think the most important experience I’ve had here is the experience of being a part of Coug culture. The thing about Cougs is we all care about one another. Even when we disagree, even when we have different perspectives, we seek to accept one another and learn and grow together.”

Honors College professor Lydia Gerber praised Holze for working for change while in the ASWSU Senate. “Her engagement and activism have always been on behalf of others, particularly those who may not be able or comfortable to advocate on their own behalf,” Gerber said.

Holze plans to take a gap year to work in Pullman and apply to graduate programs in public administration. Ultimately, she would like to be active in policy work for a nonprofit organization.

Another CAS outstanding senior of 2019 is Trevor Foote, who received the distinction from the Department of Physics and Astronomy.

A native of Spanaway, Washington, Foote will graduate with a bachelor of science in physics, with an emphasis in astrophysics. He earned his first degree—a bachelor of science in civil engineering—in 2011 before joining the U.S. Army as an engineering officer. In that capacity, he led a group of 20 soldiers in road maintenance and infrastructure rebuilding following natural disasters at locations around the world.

He left the Army in 2017 to work in construction, but eventually realized that his real passion is for outer space. He then returned to WSU for a second degree.

Foote’s senior research thesis, “Maximum Luminosity of Type Ia Supernova as a Function of Distance from Host Galaxy,” analyzes light curve data to determine the distance of supernova from its host galaxy. He is also part of the Saam Laboratory Research Group: Optical Spin Polarization and Magnetic Resonance, research that advances the effectiveness of medical imaging procedures.

Foote’s research interests include the viability of potential signs of life and habitability of exoplanets—planets that revolve around stars rather than the sun—and looking at planets in other solar systems and for those that can sustain life or already have life.

He is a member of Phi Beta Kappa, America’s oldest honor society for liberal arts and sciences; the WSU Veterans Club; SALUTE National Veterans Honor Society; and the WSU Physics and Astronomy Club. He has been awarded several scholarships, including the NASA National Space Grant College and Fellowship Program.

“Trevor is clearly someone who appreciates the process of doing science, said his professor and department chair Brian Saam. “He has had a career in the military and in the private sector as a successful engineer, and yet he came back to WSU because he has an appetite to follow his curiosity to learn more about the natural world.”

This summer, Foote plans a backpacking adventure in Europe before entering a doctoral program in astronomy and space science at Cornell University. After earning his PhD, he would like to work for NASA and hopes to become an astronaut.

A firm foundation in public service

Gavin Pielow is the 2019 Outstanding Senior representing the Department of History.

He has always been enthusiastic about for being a Coug because his parents and great-grandfather attended WSU, and he wanted to be involved at the University in meaningful ways, he said.

His achievements on campus have earned him numerous awards and recognition, including the President’s Award for Leadership, the Cougar Commitment Award, the Community Involvement Award, and KUGR Radio’s Talk Show of the Year Award.

Pielow is member of the Order of Omega, Phi Beta Kappa, and honor societies for both history and political science.

At WSU, he co-hosted a weekly, three-hour radio talk show which engaged politically diverse hosts and guests in political dialogue; served as president of the WSU Young Democrats and the Pre-Law Society; and as All-Campus Senator for ASWSU.

In 2016 he interned for a Congressional campaign and in 2018 for the Office of the Governor in Constituent Services in Olympia. He recently finished an appointment as director of legislative affairs for ASWSU, serving as the official lobbyist for undergraduate students.

“In my eighteen years of teaching at WSU, Gavin stands alone for his high intelligence, work ethic, and commitment to public service,” said history professor Theresa Jordan. “He demonstrated his sharp and discerning intellect, evaluating an issue from a full range of perspectives. Gavin also has a remarkable desire to serve the public and create a better world for all its inhabitants.”

“I am absolutely grateful for all my family, my friends, and my professors for all their constant support of my ambitions,” Pielow said. “WSU provided me with the tools and environment to grow beyond what I imagined after high school, and because of that, I am overwhelmingly proud to call myself a Coug.”

Pielow’s next step is graduate school in public policy with a long-term goal of a fulfilling career in public service.

See the list of all CAS Outstanding Seniors of 2019 who will be honored in a medallion ceremony on Friday, May 3, at 2:00 p.m. in Bryan Hall. Read a related article here.

–By Arlene Parkay and J. Adrian Aumen, College of Arts and Sciences