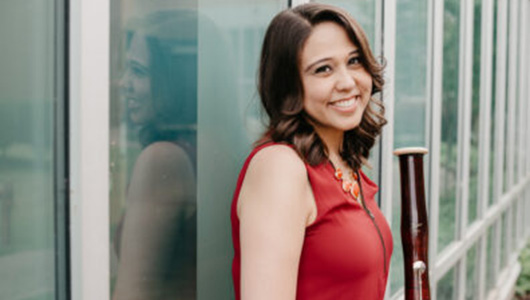 A self-described “band kid” growing up in Kennewick, Washington, Jacqueline Wilson has always found music to be a respite from the stresses of life.

Wilson, a new assistant professor in the School of Music, specializes in the bassoon, a double-reed woodwind instrument that she cherishes for its versatility and rich tones.

Her scholarly research focuses on the legacy of the use of classical music by Native Americans as a tactic of resistance. “The first time I saw professionals working within their heritage it was very inspiring,” Wilson said. “I began to look at my cultural identity as a classical musician and I knew I wanted to pursue that intersection.”

During the assimilation era of Federal Indian Policy, classical music was used as a tool of re-enculturation. It was then reclaimed by Native American players, composers, and communities over the past century.

“After getting out of boarding schools, many Native Americans continued playing when they returned to the reservations,” said Wilson (Yakama). “They didn’t abandon who they are as people. The music itself wasn’t antithetical to their traditions. They formed bands like the U.S. Indian Band and played Sousa marches in headdresses and regalia. I became very inspired by the resilience of these acts and by Native Americans asserting their identity in their performances.

Although she is missing some of the personal connections of in-person teaching this fall, she can use her webcam to get extreme close-ups of fingerings on the bassoon and the online environment spurs creativity in lesson planning.

In addition to teaching, Wlson plays with Solstice, the WSU faculty wind quintet and is a founding member of Ensemble 337, an innovative bassoon and marimba duo with WSU percussionist Christopher Wilson. She also co-hosts the Double Reed Dish podcast, which has gained a loyal niche following in the music community.

“It’s a very nerdy podcast,” Wilson laughed. “We interview prestigious players and ask about their story and their perspective. It’s grown into a cool thing.”

Wilson is looking forward to building relationships on campus and in the community to showcase Native American composers and the profound effects music has on culture and environments.

“I dreamed of leaving home and seeing the world and I was fortunate to do that,” said Wilson, who earned her undergraduate degree at Eastern Washington University, her master’s at Boston University, and her doctorate at the University of Iowa. “But I started to value my own experience and I really gained a desire for proximity to family and those things. I also wanted to be at a university where what I’m doing is immediately relevant to the community and at a place that values the things that are important to me. I care deeply about the educational and cultural resources available to this region.”

Adapted from the WSU Office of the Provost