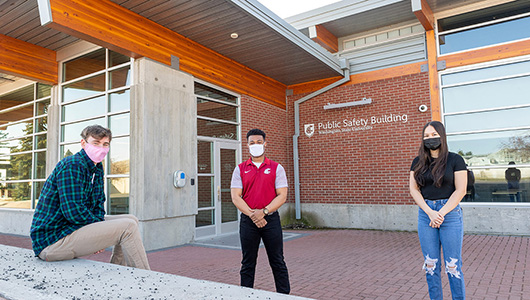 The Student Legal Research Association (SLRA) is helping evaluate data from WSU’s police department as part of measures to address racial disparity in arrests on the Pullman campus.

Michelle Lee, a political science pre-law major who was searching for volunteer experiences after the pandemic shut down courthouse internships in spring 2020, worked with WSU’s Pre-law Resource Center to jumpstart the association. Lee recruited other students and, as a group, they decided to take on the racial disparity in campus arrests as a research project.

“We let the police department know it is going to be an impartial study. We’re not here to take any sides,” said Andrew Green, a criminal justice and political science pre-law major who co-leads the group with Lee. “We just want to analyze the data and from there make recommendations.”

Drawing the data analysis skills of math majors Sean Townsend and Jack Weyer, the SLRA analyzed the arrest data but chose different parameters than previous analyses, including using the demographics of the Pullman campus instead of the entire city of Pullman as a comparison. The student-led analysis found that in the data from Jan. 5, 2016, to Sept. 15, 2019, the arrest rate of Black people was 2.75 times more than would be expected based on the Black population on campus. While not as high as previous disparities reported by the Daily Evergreen or WSU Office of Compliance and Civil Rights (CCR), this figure was still substantial.

“We also researched policy proposals and talked to students to see how they felt about the police and what could be improved upon,” said Lee.

Through those discussions and others with police and faculty, the association made several reform recommendations (PDF), including: making the police advisory board more accessible and increasing student input as well as revising collection and review of demographic data. The group also suggested that the department undertake a Counter Bias Training Simulation (CBTSim) program developed by WSU researchers.

These actions are part of an effort to address disproportionate arrests of Black people by campus police, a problem identified by a Daily Evergreen article in fall 2019 and a following report by WSU Office of Compliance and Civil Rights (CCR) in May 2020. The term “arrest” in police data includes non-custody interactions such as issuing traffic citations.

After discussions with the CCR and the police advisory board, WSU Police Chief Bill Gardner drafted a civil rights strategic plan, which was released in December. Gardner said that the plan was just a start.

“Our efforts will be ongoing. They won’t end,” said Gardner. “Our civil rights plan will keep going and changing as we learn new things and new opportunities open up. We will keep pushing it.”

The plan outlines steps the department will take to help combat potential bias, including having the entire force complete coursework for WSU’s Community and Equity Certificate, improving bias complaint reporting, increasing community engagement, and examining ways to improve collection of racial demographic information. It also calls for ongoing review of arrest data by the department as well as by the Student Legal Research Association.

The department is also working with WSU criminal justice professor David Makin and the Complex Social Interactions Lab on a project to help officers review and analyze body camera footage of past interactions to try to understand the effect their actions have.

One of the biggest problems with bias training for police is that very little research has been done on whether it works. WSU researcher Lois James plans to change that.

The CBTSim, developed by James, an assistant professor in the College of Nursing, and her colleagues, is based on decades of police data and uses interactive video to place officers in simulated scenarios where they have to react in the moment.

“Instead of just learning about bias in a classroom, we want officers to actively practice in situations where bias could come up,” said James. “Then they go through a process to understand how they view the world, how they receive information, and what their mental filter looks like because at the end of the day, that’s all implicit bias is. It can lead to some bad mistakes if you’re not aware of what that mental filter looks like for you.”

The simulation training is now used by several police departments across the country, and with a recent grant from the National Institutes of Health, James is in the process of evaluating its effectiveness with the Sacramento Police Department.

“We need to find ways to encourage that debrief portion,” said Gardner. “What we want to do is create opportunities for thought. Maybe it happens when you’re all alone, but that could be the thing that really starts to make change.”