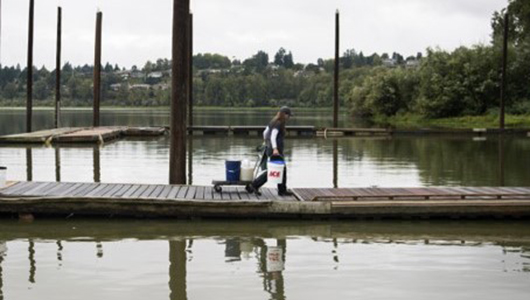 On most summer days, Vancouver Lake is a popular place for windsurfing, boating, and birdwatching. More and more, however, this picturesque place is closed to recreation for months at a time due to harmful algae blooms (HABs) that contain toxins which can cause sickness, or even death, in people, pets, fish, birds, and wild animals.

Gretchen Rollwagen-Bollens, associate professor in the School of the Environment and co-director of the WSU Aquatic Ecology Lab at WSU Vancouver, has spent more than a decade working to identify contributing factors and developing management and mitigation strategies.

Blue-green algae is caused by cyanobacteria, microorganisms related to bacteria that are capable of photosynthesis. Cyanobacteria are common in aquatic systems throughout the world and are an important part of the food web. They occur naturally and typically aren’t a problem. But over the past several decades, there have been an increasing number of excessive blooms, and that is a cause for concern because some cyanobacterial species produce toxins that may cause illness or fatalities to humans and/or pets after ingestion or exposure.

Cyanobacterial blooms may also diminish water quality and decrease dissolved oxygen levels. This leads to ﬁsh kills, decreased biodiversity, and the disruption of ecosystems and food webs. Harmful cyanobacterial blooms have recently become a worldwide problem, and the frequency and magnitude of these events is likely to increase in the future due to the warming of water bodies caused by climate change.

The main causes of algae blooms include excess nutrients (most from human activities such as faulty septic systems, landscape fertilizing, and stormwater runoff), sufficient sunlight, poor water circulation, and warm water temperatures. Algal blooms occur naturally every spring in lakes at Washington’s latitude. Most are harmless, but they can be unsightly, smelly, or slimy, especially as they decay. But sometimes the blooms produce toxins that are harmful, and that’s a problem.

Rollwagen-Bollens and her colleagues are examining the interaction of different factors that drive cyanobacterial blooms, including interactions within the food web which may increase or decrease a harmful bloom.

The researchers have found a relatively consistent seasonal succession of phytoplankton and zooplankton species and a pattern of interacting factors that inﬂuence cyanobacterial bloom dynamics. They propose that blooms occur in a relatively similar fashion during mid- to late-summer each year.

Cyanobacterial blooms typically start on warm sunny days when nitrogen-containing nutrients are low but phosphorus-containing nutrients are elevated in concentration. Under these conditions, cyanobacteria can grow very rapidly, especially when copepods shift their diet away from their favorite prey, microzooplankton, and instead consume phytoplankton other than cyanobacteria, which removes the cyanobacteria’s competitors for nitrogen. During a large bloom, cyanobacteria may begin to produce toxins if they experience environmental stress when nutrient levels get reduced too much or too quickly.

In the weeks following the blooms’ peak, both nitrogen and phosphorus concentrations drop and the copepod feeding rates fall to near zero. At this point, the very small microzooplankton organisms ramp up their consumption of cyanobacteria, and the bloom is dissipated. These findings are consistent with patterns observed in other large, shallow lakes.

Rollwagen-Bollens and her fellow researchers have found Vancouver Lake to be an excellent environment for studying cyanobacterial bloom dynamics in order to develop bloom management strategies which may be applicable across a wide range of temperate, eutrophic lake systems (those that are rich in nutrients and thus support dense algal populations). These studies are critical to better understanding harmful algal bloom events, so effective mitigation strategies can be used in reducing their risk to people, pets, and wildlife.