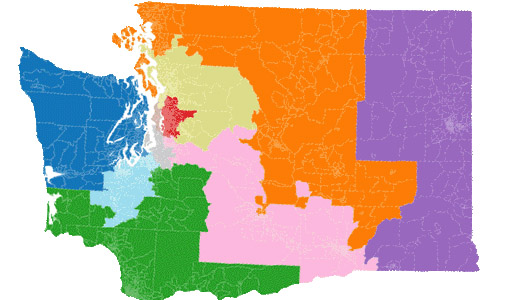 “We wanted to build an open-source software tool and make that available to people interested in reform, especially in states where there are skewed baselines,” said Daryl DeFord, assistant mathematics professor at Washington State University and a co-lead author on the paper. “It can be an impactful way for people to get involved in this process, particularly going into this year’s redistricting cycle where there are going to be a lot of opportunities for pointing out less than optimal behavior.”

In an article in the Harvard Data Science Review, the DeFord and his fellow researchers describe the improved mathematical methodology of GerryChain: a tool can help observers detect gerrymandering in a voting district plan by creating a pool, or ensemble, of alternate maps that also meet legal voting criteria. This map ensemble can show if the proposed plan is an extreme outlier—one that is very unusual from the norm of plans generated without bias, and therefore, likely to be drawn with partisan goals in mind.

An earlier version of GerryChain was used to analyze maps proposed to remedy the Virginia House of Delegates districts that a federal court ruled in 2018 were unconstitutional racial gerrymanders. The updated tool will likely play a role in the upcoming redistricting using new census data.

The GerryChain tool, first created by a team led by DeFord as a part of the 2018 Voting Rights Data Institute, has already been downloaded 20,000 times. The new paper, authored by DeFord along with Moon Duchin of Tufts University and Justin Solomon of the Massachusetts Institute of Technology, focuses on how the mathematical and computational models implemented in Gerrychain can be used to put proposed voting districting plans into context by creating large samples of alternative valid plans for comparison. These alternate plans are often used when a voting plan is challenged in court as being unfair as well as to analyze potential impacts of redistricting reform.

For instance, the enacted 2010 House of Delegates plan in Virginia had 12 voting districts with a Black voting age population at or above 55%. By comparing that plan against an ensemble of alternate plans that all fit the legal criteria, advocates showed that map was an extreme outlier of what was possible. In other words, it was likely drawn intentionally to “pack” some districts with a Black voter population to “crack” other districts, breaking the influence of those voters.

One of the biggest challenges to creating voting maps are the sheer number of possibilities, DeFord said. Many states like Virginia have hundreds of thousands of census blocks. They also have many rules and goals for structuring voting districts: such as keeping them geographically contiguous and compact with units like counties and cities intact. Many states also want to protect “communities of interest” an often undefined term, but the federal Voting Rights Act explicitly aims to protect minority voters, since historically, gerrymanders have sought to weaken the effect of their vote. In addition, multiple states require that voting maps be drawn with an attempt at political neutrality.

Even with all these rules, voting maps can still be drawn in a myriad of different ways.

“There are more feasible plans in a lot of states than there are molecules in the universe,” DeFord said. “That’s why you want this kind of mathematical tool.”

Since the advent of computers, models have provided the ability to make an array of maps. Before the current version of GerryChain, many models used a data method called a “Flip walk” to create alternatives, which involves changing just one assignment at time, such as a precinct or census block. Every change has a ripple effect on other districts, resulting in a different map.

The tool developed by DeFord and his colleagues uses a method called a spanning tree recombination or “ReCom” for short. To create an alternative voting map, the method involves taking two districts, merging them together before splitting them apart again in a different way. This creates a greater change with multiple voting blocks changing at a time.

The computational tool can create many alternative voting plans within a matter of hours or days, and it is freely available for use by voting reform groups or anyone who has knowledge of Python, the data software behind it.

The authors emphasize, however, that computers alone shouldn’t create the voting plan that is ultimately adopted for use. Rather the ensemble method provides a tool for analyzing baselines and evaluating potential alternatives.

“This is not some sort of magic black box where you push the button, and you get a collection of perfect plans,” said DeFord. “It really requires serious engagement with social scientists and legal scholars. Because the rules are written and implemented by people, this is a fundamentally human process.”

Top image: A map of Washington state generated by GerryChain.