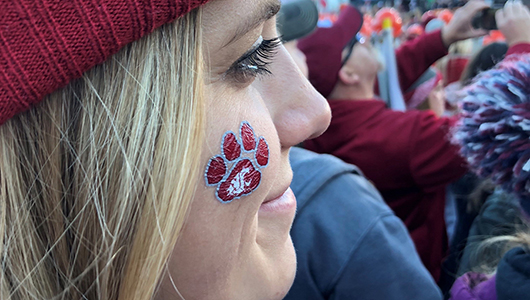 Carly Ellingsen (’16 BS zoology) comes from a long line of Cougars. She’s named after her great-grandfather, Carl “Tuffy” Ellingsen, who kicked, ran and threw the Cougars to their second Rose Bowl in 1931.

The list goes on: uncle Bruce lettered in football; uncle Jim lettered in golf; uncle Rick lettered in wrestling; for uncle Ron it was tennis; and her cousin Taylor lettered in volleyball.

But May marked a rare Cougar first for the Ellingsen family – its first WSU post-bachelor’s degree. Following eight years at WSU, Carly walked with her Doctor of Veterinary Medicine degree earlier this month.

“The athletic gene must have skipped a generation,” she joked. “It almost does add a little pressure because my grandpa and great-grandpa left such a big legacy at the school; it motivates you.”

The fourth-generation Coug has attended WSU football games longer than she can remember, but she almost wasn’t a Coug. She originally committed to Montana State University her senior year of high school.

“I toured the campus and I put down money to go there but when it came time to buy season tickets, I decided at the last minute the family tradition was too strong,” Carly said. “I just couldn’t imagine going to another school or rooting for any team other than WSU.”

Carly ventured to Pullman in 2013 to pursue a bachelor’s degree in zoology and stayed on the Palouse to attend one of the top veterinary colleges in the nation. Since her days at Mullan Road Elementary in Spokane, that was always the plan.

“I explored other options my senior year [of high school] but ultimately I realized the dream I had as a little kid, that’s what I wanted to do,” she said.

Her not-so-active Labrador retriever, Annie, a birthday gift from her parents when she was in the fifth grade, played a major role. The yellow Lab was diagnosed with diabetes while Carly was in middle school. Throughout high school, Carly administered insulin shots twice a day until leaving for college.

“We were constantly trying to get her diabetes under control,” she said. “We struggled with it her whole life. Looking back, she made me realize all of what goes into veterinary medicine and how brilliant veterinarians are.”

Growing up, if Annie or any of the family’s other pets needed to go to a veterinarian, Carly went, too.

“I loved going in and trying to make her feel better,” Carly said.

During her fourth-year clinical rotations throughout the Pacific Northwest and at WSU’s Veterinary Teaching Hospital, that love to care for animals was tested with challenging cases and didn’t waver.

This summer the Spokane native and her Coug fiancée Jeremy (‘17) are off to western Washington to sport her crimson at small animal practice in Juanita Bay Animal Hospital in Kirkland, Wash. She will miss WSU, Cougs helping Cougs, and watching from the Walmart parking lot as the Pullman sun sets behind the rolling wheat fields.

The youngest from a family of physicians, she said she thought long and hard about pursuing medical school.

“I still think about it sometimes,” Carly said, “but I really love animals, and I like the added challenge of a client and patient.”