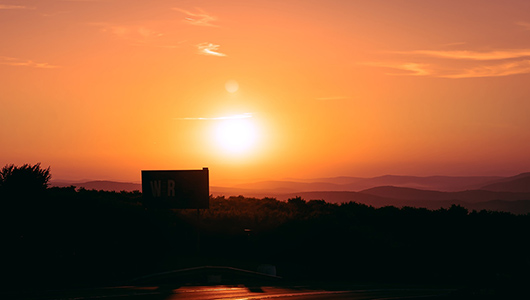 In a study of climate data from 1979 to 2019, WSU environmental researchers found the number of large-area heatwaves occurring simultaneously in the mid- to high-latitudes of the Northern Hemisphere was seven times greater in the 2010s than in the 1980s.

On average, there were concurrent heatwaves on 143 days each year of the 2010s—almost every day of the 153 days of the warm months of May through September.

The concurrent heat events also grew hotter and larger: their intensity rose by 17% and their geographic extent increased 46%.

“More than one heatwave occurring at the same time often has worse societal impacts than a single event,” said Cassandra Rogers, a WSU post-doctoral researcher in the School of the Environment and lead author of the study in Journal of Climate. “If certain regions are dependent on one another, for instance for agriculture or trade, and they’re both undergoing stresses at the same time, they may not be able to respond to both events.”

Heatwaves can cause disasters from crop failures to wildfires. Concurrent heatwaves can multiply those threats, the authors pointed out, exhausting the ability of countries to provide mutual aid in crises as was seen during the multiple wildfires in the U.S., Canada and Australia associated with the 2019 and 2020 heatwaves. A previous study also found that concurrent heatwaves caused about a 4% drop in global crop production.

The study defined large heatwaves as high temperature events lasting three days or more and covering at least 1.6 million square kilometers (about 620,000 square miles), which is roughly equivalent to the size of Mongolia or Iran.

The researchers analyzed ERA5 data produced by the European Center for Medium-Range Weather Forecasts, which blends vast amounts of observational data from weather stations on land, water buoys and aircraft as well as data from satellites with weather forecasting models. ERA5 provides globally complete estimates of hourly data for various climate variables from 1979, when satellite data became available, which is why the study focused on this time period. 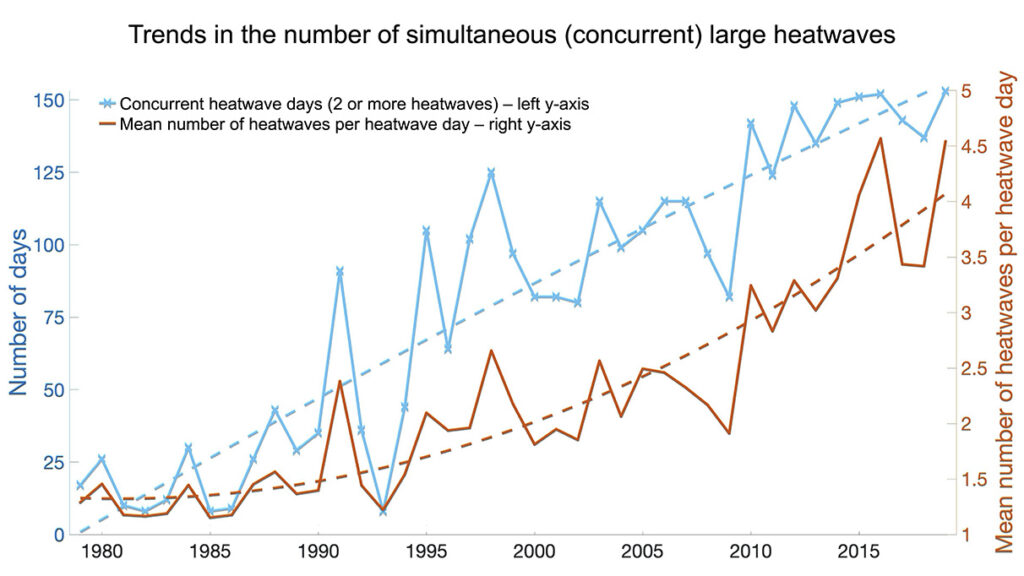 Using these observational data, the researchers found that the primary driver of the heatwaves was the overall rise in global mean temperature due to climate change. The world has warmed one degree Celsius (about 1.8 degrees Fahrenheit) over the last century with the vast majority of the rise, two-thirds, occurring since 1975. The researchers also found that increasing occurrence of two hemisphere-wide circulation patterns made particular areas more vulnerable to concurrent heatwaves, including eastern North America, eastern and northern Europe, East Asia and eastern Siberia.

The study adds more evidence for the need to curb greenhouse gas emissions and mitigate climate change, the researchers said, and the continued rise in temperature means the world should prepare for more concurrent heatwaves.

“As a society, we are not currently adapted to the types of climate events we’re experiencing right now,” said co-author Deepti Singh, WSU associate professor in the School of the Environment.

“It’s important to understand how we can reduce our vulnerability and adapt our systems to be more resilient to these kind of heat events that have cascading societal impacts.”

In addition to Rogers and Singh, authors on the study include Kai Kornhuber of Columbia University, Sarah Perkins-Kirkpatrick of the University of New South Wales in Australia and Paul Loikith of Portland State University. This research was supported by the National Science Foundation and the Australian Research Council.