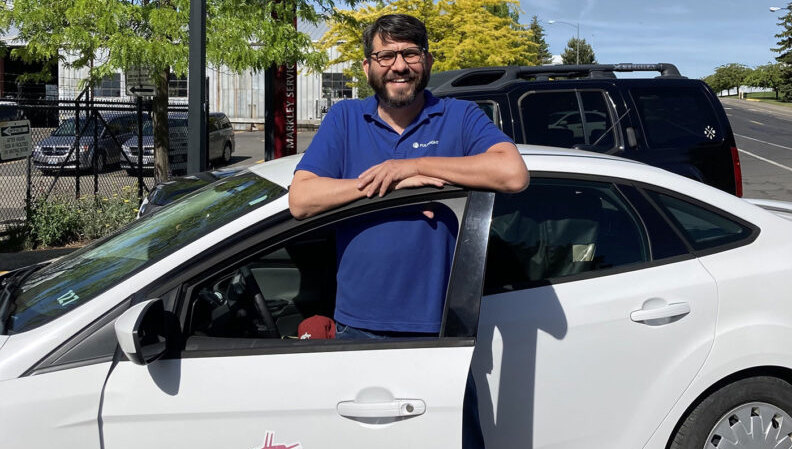 His research focuses on the Northern Cheyenne and White Mountain Apache who served as scouts for the US Army from 1866 to 1947. The army needed Indigenous soldiers if they hoped to win the US-Indian Wars. Booth, himself an Upper Skagit, chronicled his summer field research for Washington State Magazine.

In his own words

When your research involves the Native people who served as US Indian Scouts, it means traveling vast stretches of the American West. The materials these people left behind are few and far between. It also means consulting with the tribes, who have every interest in how their ancestors’ stories are told.

While I fulfilled an obligation to serve as a fellow at the Newberry Library in Chicago and visited sites for my dissertation, I found so much more on the highways of the American West. It took me to quiet places where few travelers venture. It took me to one of the busiest cities in our nation. It took me to some of the most profound historical places I’ve seen. Have Ford Focus, will travel.

I have driven by Pompey’s Pillar a few times on my way to Miles City, Montana. I never stopped. This summer I finally stopped to see one of the only physical remnants of the Lewis and Clark expedition. On July 25, 1806, William Clark carved his name on some sandstone near the Yellowstone River. It was hard to see the old graffiti due to the plexiglass meant to protect it from the weather and people. The signage depicted the area as “A Crossroad of Events” and mentioned troops protecting the survey and railroad crews, but stood mum on the topic of my research, Indian Scouts.

Decked out in little flags, the Custer National Cemetery stood ready for Memorial Day. On previous trips, I’d walked the places of the Little Bighorn Battlefield and admired the new monument to the Native warriors who prevailed on that hot day in June 1876. This time, I spent my time walking row upon row of the Custer National Cemetery, which is adjacent to the park. As a resting place for our nation’s veterans, it remains a hallowed place overlooking the Little Bighorn River. I noticed a few older graves. One headstone stated “Curly, Custer Scout, May 22, 1923.” Another one read, “White Man Runs Him, Alias Mahr-Itah-Thee Dah-Ka-Roosh, Montana, Private, Indian Scouts.”

Sadly, most historians, let alone average Americans, do not know these names. These men were Apsáalooke (ahp-SAH-luh-guh), Crow, scouts who were at the Battle of Little Bighorn. They tried to warn Lt. Colonel George A. Custer of the impending danger of charging into the camp of approximately 3,000 Lakota, Dakota, Northern Cheyenne, and Arapaho. For the army, it was one of the worst defeats in their war against “hostile” Native people.

In historical shorthand, we often refer to these conflicts as the “Indian Wars.” The problem with that characterization is that it implies that the Indians caused it and therefore needed to be punished for it. Native people were simply living on the land they called home for generations. Like any person, they reacted to attacks on their homeland with returned violence. Most of us would be willing to die for our families and homes. They were no different.

The conundrum in all of this are the Indian Scouts. These were Native men who willingly took up arms to fight for the government against other Native people. Why would they do that? The truth is that certain tribes hated other tribes. The animosity between some of these tribes reached back into time before White settlers arrived. The army knew this and used another old military maxim to their advantage: divide and conquer.

While that was the army perspective, what did Native men get out of serving as scouts? They were able to survive in a fast-changing world. The 1800s must have seemed like living inside a tornado⁠—everything upside down and nothing firm to hold onto. The scouts spoke their own languages, practiced their own cultural traditions, and fought people they didn’t like much anyway.

For the most part, they lived good lives. They supported their families and communities. They accessed plentiful army stores. With an army blue jacket, they traveled the West untouched⁠—no one wondered why they weren’t on their reservation.

For some, they only realized the cost of their service when it was too late. US Indian Scouts participated in some of the worst Indigenous massacres at places such as Washita and Wounded Knee. After the 1890 Wounded Knee Massacre, James Tangled Yellow Hair remarked that this was “not at all brave on the part of the soldiers.” Yet he continued to wear the army blue uniform to stave off hunger, poverty, and the lingering possibility of being labeled “hostile” to the US government.

As I drove into the Washita Battlefield National Historic Site in Oklahoma, the place seemed misnamed. It was hardly a battle. On a frigid November 27, 1868, Custer and his Seventh Cavalry rode into a village of about 300 Cheyenne people and shot 60 of them. National Park Service signage refers to this as a “clash of cultures,” which also seems to dodge important historical questions. Who bears the burden of this battle and why does no one want to talk about it? The place is silent now, but it cries out for an amends.

All along the journey, I passed out gifts from my mobile storehouse. The blankets went to honored friends and collaborators. The cheese and smoked salmon found its way to a few grateful associates. In my own way, I attempted to smooth the way for better conversations and set a tone for friendship. I carry the lessons of my own ancestors, Native and White, to treat everyone with dignity and respect. Perhaps this could work for future dialogues about difficult stories with wounded people on all sides?

As I traveled on, I stopped at Fort Huachuca, Arizona. It is one of the last active military posts from the US-Indian Wars. As I explored the oldest section of the army post graveyard, I noticed that White and Native soldiers were buried side-by-side. As was the custom, the wives and children of soldiers at the fort were mixed together. All were equals in death.

This fits with my knowledge of military history. I never served in uniform, but soldiers consistently report that the reason they fought was to help the buddy next to them. They may have joined for various reasons, but the thing on the battlefield that keeps them fighting is to protect their friends as well as themselves. The cemetery made that more real to me.

In a way, it reminded me of the “Cougs help Cougs” spirit at WSU. While I was driving through Iowa in the Coug Car, a big, black pickup started to roar past me and then slowed to keep pace. I thought to myself, “Shoot. Now what?!” I timidly looked over to see the folks in the truck waving, giving me a thumbs up sign and honking. I smiled and waved. As they passed me, I noticed a WSU sticker in their rearview mirror. We know something about an esprit de corps.

The US Indian Scouts did as well. They wore a crossed arrows insignia on their uniforms and hats. When the unit was disbanded in 1947, the insignia transferred to the US Army Special Forces, where it lives on to the present day. Those Native men who served in uniform represented a unique moment that is unlikely to come around again. Their service represented their own “special forces.” They have been waiting a long time for their story to be told. We have so much to learn from them if we are willing to listen. Otherwise, the past will continue to haunt the present.