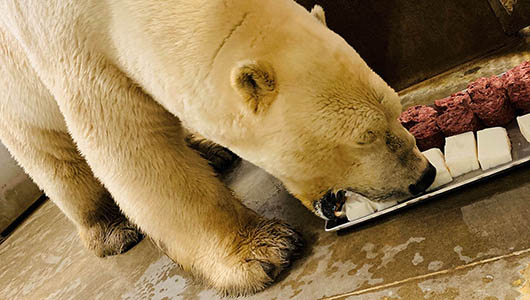 A high protein diet appears linked to kidney disease and shortened lifespans for captive polar bears, a relationship similarly suspected in humans, according to a review led by WSU wildlife biologist Charlie Robbins.

“Zoos made some assumptions in the past about the nutritional requirements of polar bears because their diet is almost exclusively animals,” said Robbins, professor and founder of the WSU Bear Research, Education, and Conservation Center.

Polar bears feed almost solely on seals and are classified as carnivores. But recent research has demonstrated that polar bears, like other bears, have nutrition and physiology more closely aligned with primates, including humans.

The paper, published in Zoo Biology, takes careful look at what zoos have fed polar bears revealing they mostly offered a diet intended for big cats, containing about 2-3 parts protein to 1-part fat, a reversal from what was observed in the wild.

Previous field studies led by Karyn Rode (’99 MS,’05 PhD zoology), now with the U.S. Geological Survey, showed wild polar bears preferentially consume a diet that is 2 parts fat to 1 part protein, which keeps their protein levels within the low range of their requirements. These findings were published in Scientific Reports in July 2021.

“Although we knew that polar bears selected for the blubber of their prey, this was the first time we were able to quantify how much fat they were actually consuming,” Robbins said. “When it comes to feeding polar bears, the general mindset has been that they are carnivores. No one has really been paying attention to the amount of protein they might need, much less limitations on how much they might tolerate.”

In the current paper, the researchers propose that both polar bears and their closest relative, the grizzly bear, require relatively low levels of protein similar to requirements of humans, primates and other omnivorous species.

When captive bears were offered blocks of pure lard and blocks of high protein meat, they preferentially chose the same ratio of fat to protein as they normally consume in the wild.

Of over 600 wild bears examined, the team found no evidence of liver or kidney disease.

“A slate of early deaths across sexes that is limited to two major organs raised several red flags for us,” said Robbins, who has researched both grizzly and polar bear nutrition for more than 35 years.

The team has worked with Mazuri® Exotic Animal Nutrition and its nutritionist, Troy Tollefson (’02 BS, ’04 MS zoology, ’07 PhD enviro. sci.), who also earned his doctorate while working at the WSU Bear Center, to develop a dry kibble that contains the fat-protein ratio equivalent to what they might consume naturally in the wild.

The authors propose that zoos adopt this food or other alternatives that mimic the fat-protein ratio found in the wild for captive polar bears, while carefully monitoring the new regime to see if it improves the bears’ health and longevity. WSU research was used in the development of the food, but none of the WSU scientists have any commercial interest in the company or its products.