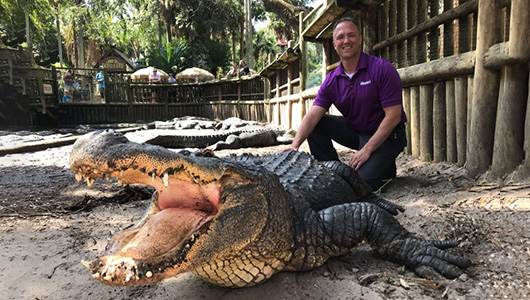 After earning a trio of degrees at WSU—bachelor’s and master’s degrees in zoology in 2002 and 2004, followed by a doctorate in natural resource sciences in 2007—Tollefson began his career at SeaWorld Parks and Entertainment at Busch Gardens in Tampa, Florida, where he managed nutrition for more than 300 different species and over 1,000 animals as a zoo nutritionist.  Since 2011, he has been senior nutritionist and research and development manager for Mazuri® Exotic Animal Nutrition.

People have studied domestic animal diets for ages, but “we’ve just scratched the surface“ when it comes to exotic animal nutrition, Tollefson said. Collaborating with researchers,  veterinarians, nutritionists, and animal owners, he formulates animal diets, working with feed mill personnel to develop them. Tollefson then partners with animal caregivers and scientists on diet trials, making sure they work in practice.

Zoos try to match an animal’s wild diet, but it’s nearly impossible to perfectly match ingredients for hundreds of species found across the globe.

“One study found mule deer eating 417 different plant species—you can never exactly replicate what it eats in the wild,” he said. “I try to replicate the nutrition, not the ingredients.”

His work often involves trying to bring nutrients in balance. Too much starch can lead to wasting diseases in giraffes, moose, and other ruminants, while too much iron causes health problems in black rhinos and toucans. Copper deficiency turns the coat of the blesbock antelope from a rich brown to a dull beige. Tollefson carefully calculates diets for each case.

“At the zoo, I was able to help a few hundred animals,” Tollefson said. “Today, as a senior nutritionist, I can reach many different zoos to help them do better. As we all learn more through the research done at universities like WSU, we can improve health for many different animals.”

As an affiliate faculty member with the School of the Environment, he continues to collaborate with WSU research in animal nutrition, including a recently published study that linked high-protein diets with health problems in polar bears.

“High protein is not what a bear actually needs,” Tollefson said. “As we learn more, we can adjust those diets.”

“I was one of those Gen-Xers who didn’t know what to do with my life,” said Tollefson, who took a non-traditional path to college. After working on a fishing boat, bookkeeping for an electrical contractor, and as a health club owner, he went back to school. Fascinated with health, nutrition, and animals, Tollefson learned about WSU’s grizzly bear research, and moved his young family to Pullman.

Tollefson worked in collaboration with Professor Charles Robbins to develop the diets now used for the grizzly bears at the WSU Bear Research, Education, and Conservation Center. As an undergraduate, and later as a master’s and doctoral candidate, he seized every chance to volunteer and take part in research projects on pygmy rabbits, mule deer, bighorn sheep, and bears. That led to career success.

“Anytime there was an opportunity to work with animals, I took it,” he said. “School opens the door, but it’s really about the experiences you find while you’re at the university. When opportunities cross your path, don’t let them go by.”

Tollefson will share insights on how research can help exotic animals at the 2022 Halver Lecture in Comparative Nutrition on the WSU Pullman campus. The annual lecture is hosted by the Department of Animal Sciences.