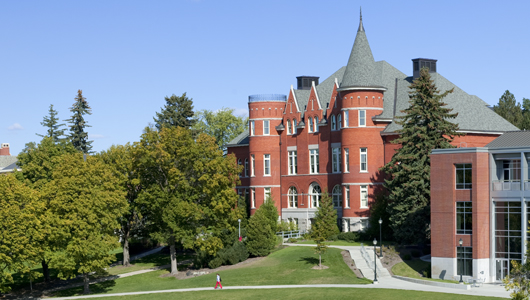 From rising inequality and declining Monarch butterfly populations to a particle with negative mass, news coverage about the College of Arts and Sciences research reached millions of people last year.

News outlets carrying the stories ran the gamut of the nation’s most popular media, including CNN, The Washington Post and National Public Radio, as well as specialty science publications like Science and all the region’s major news vehicles.

The WSU Marketing and Communications office analyzed every research news story distributed to reporters from the central news office or posted to EurekAlert, a subscription news service sponsored by the American Association for the Advancement of Science. Each news article was analyzed in the Cision news database, which monitors the vast majority of news outlets covering a given subject and computes their potential audience based on outlets’ circulations or unique visitors. The potential audience serves as a guide to relative popularity; the number of actual readers is significantly smaller, as readers and visitors rarely take in every story in a periodical or website.

Among the top 20 stories, 10 highlighted research from the College of Arts and Sciences.

Of all the stories generated by WSU public information officers, the most popular was a study by Regents Professor Tim Kohler looking at how prehistoric disparities in wealth mounted with the rise of agriculture, specifically the domestication of plants and large animals, and increased social organization. News stories on the Nature study appeared in the Washington Post, the news section of Science, the Guardian, Economist, National Public Radio and on a segment on CNN’s “Fareed Zakaria GPS.” It had a potential audience of 491 million.

Second on the list, physicist Michael Forbes’s Physical Review Letters paper on negative effective mass caught the eye of the Guardian, BBC, Yahoo!News and the social news aggregator Reddit. It had a potential audience of 399 million.

And in the third spot, a Biological Conservation study of dwindling populations of Monarch butterflies by Cheryl Schultz, associate professor at WSU Vancouver, was covered by the Tri-City Herald and the San Francisco Chronicle, among others. It had a potential audience of 327 million.

The other CAS stories in top 20:

9. Gases from ancient Inland Northwest volcanic eruptions blocked out sun, cooling planet
Research by John Wolff in the School of the Environment provides an insight into the workings of climate change.

10. Sex that moves mountains: Spawning fish can influence river profiles
Investigations into how female salmon change the character of the stream beds, and thereby shaping landscapes over time by Alex Fremier, also in the School of the Environment.

13. What’s powering your devices?
Work by Christine Horne and Emily Kennedy, both in the Department of Sociology, suggests U.S. consumers prefer sustainable power sources and would welcome the ability to monitor where their electricity is coming from at any given point during the day.

16. Huge carbon sink exists in soil minerals WSU researcher finds
Two papers from Mark Kramer in the School of the Environment demonstrate how the right soil management practices can help trap much of the carbon dioxide that is rapidly warming the planet.

18. Sperm changes documented years after chemotherapy
Michael Skinner in the School of Biological Sciences documented epigenetic changes in the sperm of men who underwent chemotherapy in their teens.

19. New device could turn heat energy into a viable fuel source
Using an innovative composite material, Yi Gu in the Department of Physics and Astronomy is developing a device which converts heat into electricity more efficiently than silicon, a semiconductor material widely used in the electronics industry.

Bonus mention:
22. Non-invasive prostate cancer diagnosing, monitoring
Cliff Berkman in the Department of Chemistry is leading development of filter-like device to isolate prostate cancer indicators from other cellular information in blood and urine.

Read about all of the results at WSU Insider.

By Eric Sorensen, for WSU Insider.