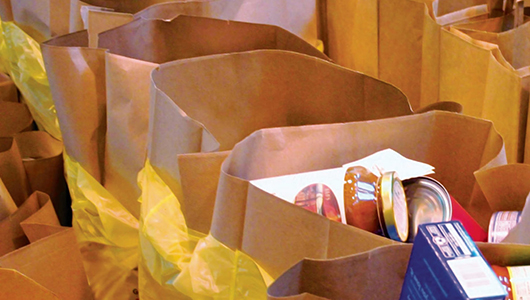 Sociologists and nutrition experts agree: food insecurity is a public health issue. Thinking of food banks and other programs as charity not only stigmatizes recipients but obfuscates the fact that we all pay, in the long run, for one another’s ill health. Whether it’s through increased healthcare costs or loss of economic productivity, not having enough to eat—or not enough nutrition-dense foods—is a cost we all share.

Read more in an excerpt from Washington State Magazine.

Especially in rural settings, where people may know each other, the cost of that stigma may outweigh health concerns. “If someone sees me in here,” says WSU sociologist Sarah Whitley (’07 MS, ’12 PhD sociology), “how is that going to make me look? If there is a job opportunity, am I going to be deemed unworthy because I took a handout from a food bank?”

She taught for a few years at Cal State University in Fresno, in the heart of one of the planet’s biggest food producing regions, the Central Valley. “That really opened my eyes, the scale of ag,” says Whitley.

And yet, much of the area surrounding the city was a food desert. “A lot of rural communities don’t have any retail anymore, so folks drive many miles to get food, and that transportation cost cuts into their already constrained food budget.”

Whitley and Pablo Monsivais, a public health nutrition expert and associate professor in WSU’s Elson S. Floyd College of Medicine, say that people have the knowledge to eat healthfully, and will if given the opportunity. Both the sociologist and the public health expert point out that the growing obesity epidemic is connected to food insecurity, as are a host of other health issues.

“There’s all sorts of research that talks not only about how food insecurity affects physiological development, including brain development, but about emotional and mental development as well,” Whitley says. As Monsivais points out, the nutrients in food—such as calcium, potassium, magnesium, as well as fats—“are all essential components of our nervous system, including our brains, which are predominantly made of fat.”

“Health takes input,” Monsivais adds. “You’ve got to have the energy, the time, the skills, the money to engage in the behaviors that lead to health. And a lot of that is diet.”

Ryan Lazo, the community partnerships coordinator at the WSU Center for Civic Engagement, works with food activists throughout Whitman County and beyond. With Joe Astorino (’15 PhD sociology), the director of Pullman’s Community Action Center (CAC), Lazo runs a food recovery program in collaboration with WSU Dining Services. They take food from dining halls that would otherwise go to waste to a commercial kitchen at the CAC, which is then distributed to the county’s many food pantries.

The food recovery program, Lazo says, “started small, but it’s growing.” At a 2015 Pac-12 cross country meet, Lazo and his partners “recovered leftover fruit and granola bars, and took them to the food bank.” Since then, the program has grown and stabilized. The recovery team even takes lentil chili left over from Pullman’s annual Lentil Festival, packages it in family-sized portions, and freezes and distributes it to those in need.

“Now, on campus, things are fairly standardized,” says Lazo. “Recoverable food is gathered at the Southside dining hall and once a week it is delivered to the CAC for repackaging.” From there, Astorino says, it is distributed around the county.

But distances are great. Astorino says that a full circuit of Whitman County food pantries takes a couple of days. Keeping perishable food fresh is a problem.

Indeed, the logistics of food distribution inspired Nils Johnson, a WSU Extension educator in Stevens County in the remote northeast of the state, to a cool solution.

Johnson, a former high-tech engineer turned food activist, designed a mobile refrigerated trailer so, instead of having to take a refrigerated semi-truck into remote areas with a commercial driver at the wheel, the CoolPup—as Johnson calls the built-to-purpose rig—can be towed behind any six-cylinder vehicle.

Changing the way food is distributed is one way we’ll beat food insecurity, Johnson says. And it’ll provide a double bang. Johnson describes a loop through Ferry, Pend Oreille, and Stevens Counties, a 250-mile round trip, that encompasses food pantries, as well as rural schools and hospitals—all hungry for fresh food. It also crosses paths with dozens of small farmers hungry for a market.