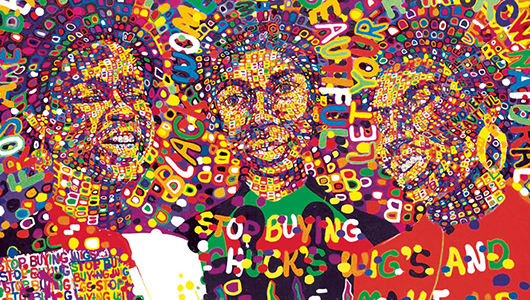 The Black Arts Movement of Chicago is the subject of a documentary by two WSU Vancouver associate professors of English, Thabiti Lewis and Pavithra Narayanan. The 50-minute film took four years to make. It’s quick-cut style keeps viewers riveted and hungry to learn more about a period of American history that birthed a rich aesthetic based on Black American experience.

The Black Arts Movement (BAM) of the 1960s laid foundations, says Lewis, for the funk of Parliament/Funkadelic and Kool and the Gang; the soul of Earth, Wind and Fire; and contemporary styles like hip-hop (which is based on the collaborative aesthetic of sampling) and the Afrofuturism of Bootsy Collins and contemporary science fiction.

But it’s not just music, Lewis points out, that makes the BAM such a powerful force in American culture. When Gwendolyn Brooks became, in 1950, the first African American to win the Pulitzer Prize, she was performing on the streets, in bars, prisons, and wherever she could learn about what other Black people were experiencing. Brooks, and other Black poets, fearlessly experimented with the rhythms and syntax of language, bringing legitimacy and a heightened aesthetic to Black Vernacular English.

As Lewis says of his undergraduate years, “Whenever I had the chance to read BAM writers, I did so. Sonia Sanchez, Amiri Baraka, Eugene Redman, Nikki Giovanni—I took up that moment because what they were doing with language was challenging notions of universality. This was really fascinating to me and made me want to become a literature scholar.”

BAM created a lot of art but also, Lewis says, a lot of institutions that continue to thrive in Chicago and other cities. Schools and museums that teach and celebrate African heritage inspire young Chicagoans to this day. Haki Madhubuti founded Third World Press as not only a publishing house, but a workshop for aspiring writers. Muralists democratized art by painting, among others, a Wall of Respect which beautified a neighborhood and “not just an elite gallery.”

John Johnson, the owner/publisher of Jet and Ebony, teamed up with Hoyt Fuller to publish Black World, a journal that pushed Black writers to think deeply, read widely, and arguably, laid the foundations for Black studies and other ethnic studies programs taught in universities around the world.

With such vast contributions to American culture, it’s no wonder Lewis and Narayanan are pushing ahead with a book-length account of the movement. Based in part on his own experience, on the interviews he and Narayanan conducted for their documentary, as well as on contributions by other collaborators, Lewis aims to show that Chicago was a “matrix, an intellectual and cultural center” that was “an infectious source” of spiritual and revolutionary inspiration for multiple generations of Americans of all colors.

View an online gallery of works by BAM artists.