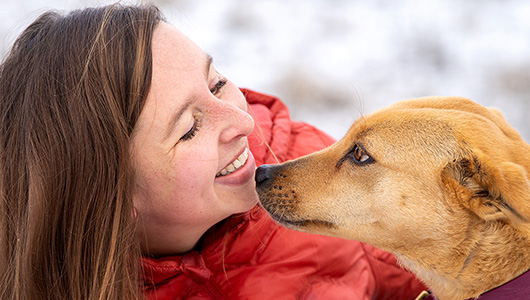 As the pandemic dragged into its second year, Washington State University research that grabbed the most media attention either provided some comfort and hope or warned of more dangers ahead.

CAS faculty featured in four of the top 10 most popular stories—including the number one spot—and were well-represented in the next 76 press releases tracked by WSU News.

Two stories focusing on the benefits of man’s – or really woman’s – best friend made the top ten this year. And even amid the pandemic, people still wanted to read about climate change impacts to animals and humans alike as well as the negative aspects of cannabis and shift work.

WSU News staff analyzed 86 research press releases from 2021 using Meltwater media tracking software for its total potential audience reach. “Potential reach” numbers are usually large but were a bit smaller this year partially due to a change in Meltwater’s circulation ratings of some media outlets. Reach numbers are based on each media outlets’ circulation or viewership added together, so they contain duplicates since many news consumers may be counted more than once. Essentially, they tell us how many times research coverage may have been seen by a reader or viewer. Still, they provide a rough idea of how much public exposure WSU’s research enterprise is receiving.

As in previous years, all the stories that did the best highlighted novel or surprising findings and demonstrated a real-world impact in keeping with WSU’s land-grant mission.

Nothing like destroying a cliché to catch attention. The news that dogs are likely women’s best friend did just that. A cross-cultural analysis led by anthropology Ph.D. student Jaime Chambers and Professor Robert Quinlan found that when dogs had a special relationship with women, people were more likely to regard dogs as a type of person, treat them with affection and see them as a member of the family. The news hit more than 250 outlets, including more than 80 radio and TV broadcasts.

Predators don’t usually prey on other predators, so the unusual imagery of a jaguar killing the smaller ocelot grabbed a lot of attention. WSU wildlife ecologist Dan Thornton also noted that the event occurred at a waterhole during a drought-stressed period in the Maya Biosphere Reserve, raising questions of whether climate change had an influence on the wild cat conflict.

Another major predator, the polar bear, is feeling the heat from climate change as this study led by WSU ecologist Anthony Pagano shows. The shrinking traditional arctic hunting grounds for polar bears in the Beaufort Sea area has contributed to an almost 30% decrease in their population. The polar bear plight gathered a wide range of interest from a small paper in Billings, Montana to the worldwide media juggernaut BBC.

Climate change has become a renewed focus in the media as some of its real effects are being felt — including the unprecedented heatwave in the Pacific Northwest last summer. This study led by climate scientists Cassandra Rogers and Deepti Singh uses observational data to show large heatwaves are happening on Earth at the same time, posing additional threats. It was picked up by not only national news outlets but more than 230 local outlets across the country.

Other CAS research stories among those most-read in 2021:

See the full list of most-read research stories of 2021 at WSU Insider.

Top photo: A cross-cultural analysis led by anthropology Ph.D. student Jaime Chambers (with her dog Priya) and Professor Robert Quinlan found that when dogs had a special relationship with women, people were more likely to regard them as a type of person and see them as a member of the family. Photo by Bob Hubner, WSU Photo Services.